(Maintain us, Lord, within thy word) for Sexagesima Sunday, for alto, tenor and bass, vocal ensemble, oboe I+II, trumpets, strings and basso continuo 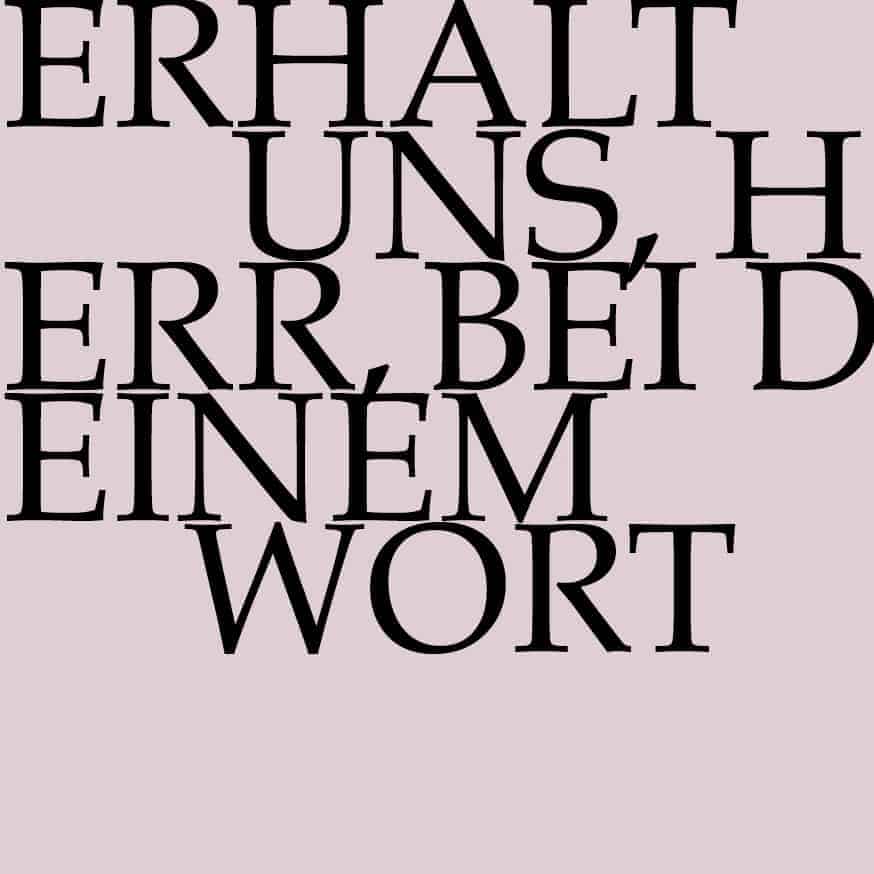 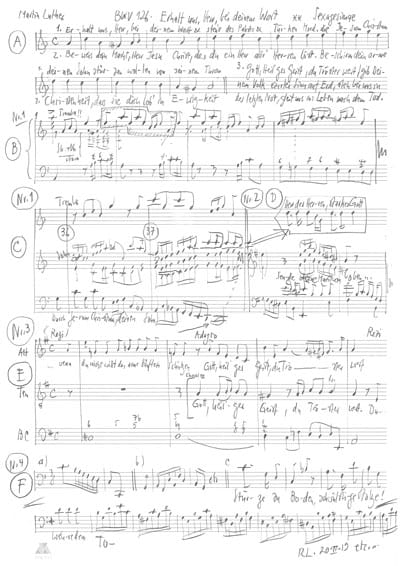 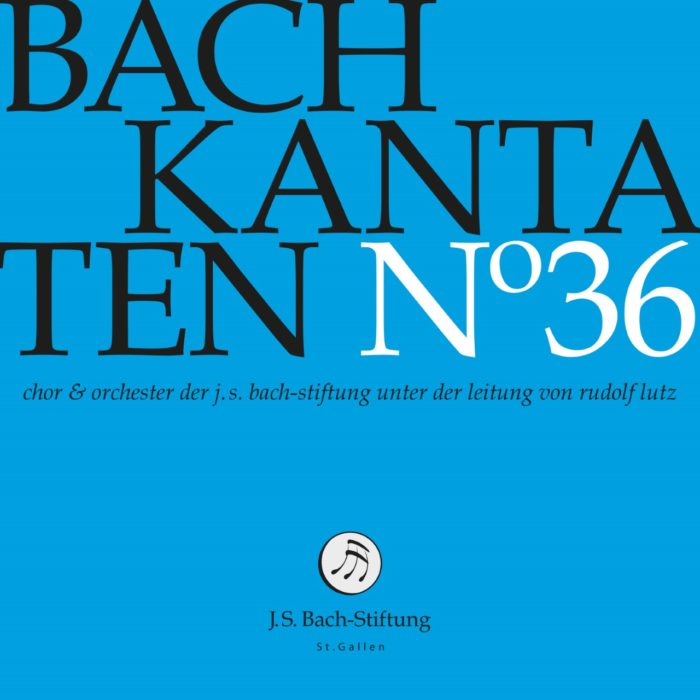 Text
Poet unknown – based on chorale verses by

Falling to the ground. To speak anger to each other.

«Er sackte in sich zusammen und fing an. Spielte von unten nach oben sozusagen, nicht wie alle anderen von oben nach unten.» (Ug36) Is this not a self-description, an admission of physical brokenness, of an infirmity and mentally deep horizons? But it is not a self-description, if one can say that at all about this poet, in whom so much is fictional and yet nothing is. Thomas Bernhard describes Glenn Gould, the virtuoso of the Goldberg Variations. A few days ago, on 12 February, the thirtieth anniversary of the author’s death was celebrated. “Kaum sass er am Klavier, war er auch schon in sich zusammengesunken gewesen, er sah aus wie ein Tier, bei näherer Betrachtung aber dann wie er scharfsinnige, schöne Mensch, der er gewesen war.” (Ug34) Bernhard describes the peculiar pianist crouching, no, crouching in front of the piano, creeping up as if stealthily reaching for the keys. Indeed, Gould had a characteristic style, an unusual posture that he was hardly able to change, not even the movement of his lips. They were signs of utmost concentration and perfection. Gould’s peculiar posture conveys something subservient, not to say audacious and conspiratorial. The reason, however, lies in the technique. His teacher Alberto Guerrero had been convinced that strength and support should not come from the upper arms and shoulders but from the back. Bernhard, who should have taken up this idea, naturally, as he used to say, nevertheless did not. He does not describe these eccentricities, as Gould described his own deviation from the norm, but devotes an entire novel, or rather a third, to the pianist. “Der Untergeher” knows a first-person narrator, Glenn Gould and a certain Wertheimer, also a pianist, who had hanged himself shortly before, in Zizers near Landquart, which is why the novel should originally have been called “Chur”; there was even a corresponding cover draft from Suhrkamp already. All three, it is said, studied together with Horowitz in Salzburg, which is of course fiction.

Now listen to the cantata, how the thirty-second notes plummet downwards in snorting cascades. The whole scale. First 7 and then 11. In between, the notes climb back up in eighths. The organ gasps as if in a hasty ascent. Then the bass aria rises, the vocal range that Bernhard actually studied at the Mozarteum and not fictionalised. This descent – one is afraid that the cellos will sabre their strings – this unrestrained plunge, this “from top to bottom”, an avalanche, a rumble, a quake, a hellish fall. There is no brokenness, this is vomiting. Here someone is wishing for the fall of others, even murder. “Sustain us, Lord, at thy word, and steurʼ the pope’s and Turk’s murder.” This is an appeal and – with all due respect to Luther’s theological authority – a call to plot. A frightened “from the bottom up”. Against the others and the establishment, it is the righters speaking against the rulers, especially against those of other faiths. The second passage is by Justus Jonas, of whom there is a beautiful painting in the Marienkirche in Halle an der Saale. He sits there firmly and heavily, with a stiff backbone. The church is right next to the Handel monument, by the way, who, standing on the pedestal, in bronze, leans casually on a music stand, almost prancing. Jonas strives for a tone that is hardly less prudent. The announcement is irony-free. “Stürze zu Boden. Schwülstige Stolze. Mache zunichte, was sie erdacht. Lass sie den Abgrund plötzlich verschlingen.”

Thomas Bernhard, this is the Wutbürger from the literary avant-garde, the Wutbürger avant la lettre. For the word was only coined in 2010, incidentally by a journalist from the “Spiegel” who described this phenomenon of revolt against the decision-makers, the revolt of outraged citizens during a reading by Thilo Sarrazin. This Beckmesserian mischief-maker, always sitting up straight, never broken, it is fair to say, is directed against immigration and Islamisation (“Germany abolishes itself”, 2010, “Hostile takeover: How Islam impedes progress and threatens society”, 2018), they are the enemy image, otherwise Germany will fall to the ground, although his name “Sarrazin” – as in a staircase joke of history – betrays his origin from the Saracens. Is education really at risk, or even IQ? The Wutbürger have made it into a socially, even demographically relevant group that – if one believes Ralf Konersmann, the great conceptual analyst of German thought – can only think in two stages, that there are “the righteous down here who do not know power but morality on their side”. It is the “fanaticism of the saturated”. These people speak rage to each other.

With Bernhard, the suada, the misanthropic, the name-calling, the vituperation is a vituperation. He is the rage bourgeois, not because he himself was angry (NZZ), but because he had an ear for the enthusiasts of indignation and comedies of existence, which he exaggerates and overplays. But Bach was already playing a little. For the sabre of the cellos is serious and threatening, but only the first time, but Bach set a dacapo. Like every other time, the evil threat in the repetition is close to farce. Bernhard, however, took the farce to the extreme, with mischievous features around his silent lips. He played literature from bottom to top. But he did not roar and never fanatically. That is what separates him from the rage citizens of today. Always there remains a pinch of gauche uncertainty. “It’s all ridiculous when you think of death.” That’s what Bernhard shouted at the Minister of Culture in 1968 when he indignantly left the hall because the poet spoke of the infamy and mental weakness of the Austrians. Then he slumped down and wanted to look like the beautiful and perceptive person he had actually been.