(Ye will be weeping and wailing) for alto and tenor, vocal ensemble, trumpet, flauto piccolo, strings and continuo

The libretto of cantata BWV 103 “Ihr werdet weinen und heulen, aber die Welt wird sich freuen” (Ye will be weeping and wailing, although the world will be joyful) serves as a vivid reminder that the church – albeit all-powerful in Bach’s time – was once a persecuted sect. 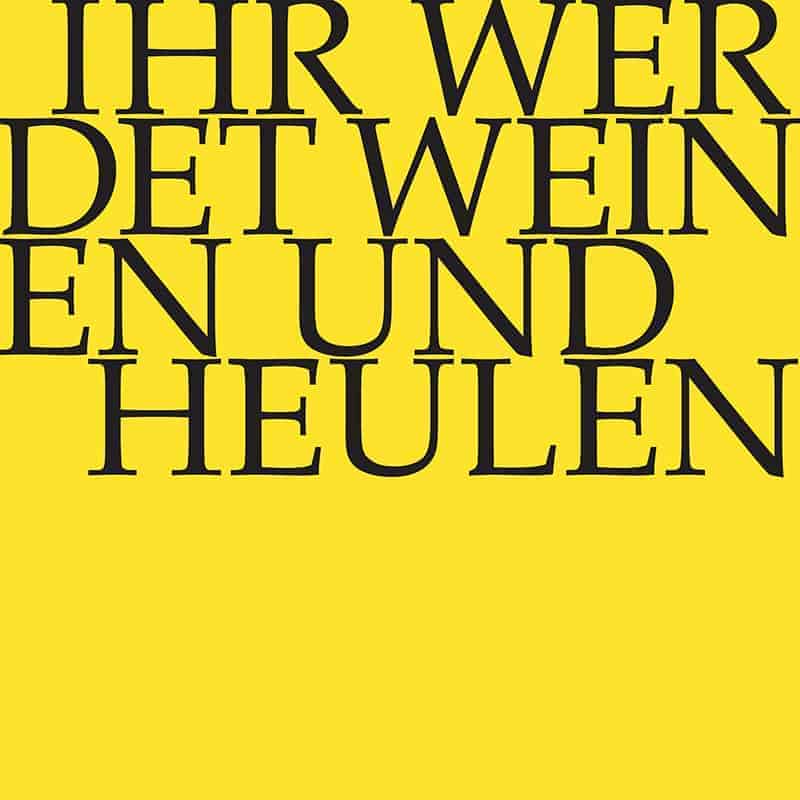 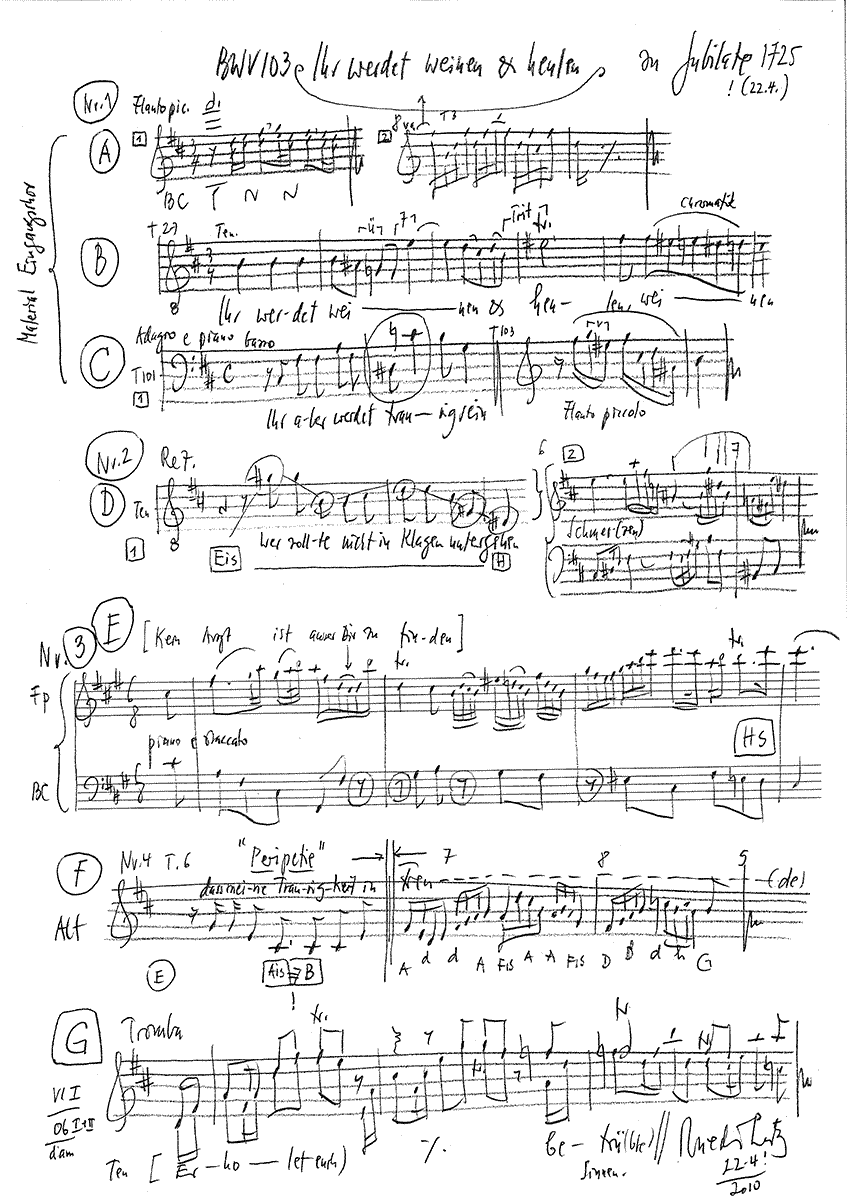 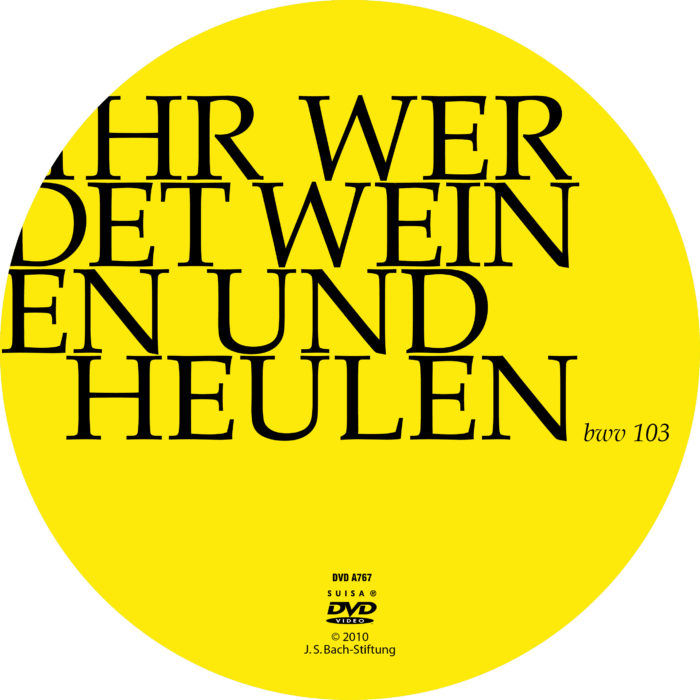 The notion that relief is unattainable without having first suffered great misfortune, even the derision of our fellow beings, is just as central to human experience as it is to this cantata’s message of comfort. For the mirrored message of the introductory chorus, Bach employs contrasting motives, setting the “weeping and wailing” as a chromatically descending progression of sighs and a devilish tritone leap, while the schadenfreude of the world is expressed through grimly driving concerto rhythms. Written in B minor, the underlying tenor of the movement is expressive, yet serious, while the oboes d’amore and sopranino recorder suggest the transience of all earthly matters, including suffering. The transformation to joy in the final line of text is interpreted very literally by Bach, but not before the insertion of eight highly expressive bars (adagio e piano) of pure compassion. This passage for the bass voice, a brotherly embrace in the moment of deepest anguish, almost seems to anticipate the German Requiem of Johannes Brahms (“Ihr habt nun Traurigkeit”), who, as a great admirer of Bach, would certainly have been familiar with the cantata, which was printed in Berlin already in 1831.
The tenor recitative explores the descent of the faithful into lamentation, before identifying Jesus’ absence as the true ill and a sorrow far more troubling to the heart and soul than persecution itself. This reference to the Farewell Discourse from the Gospel of John links the movement to the Bible passage for the relevant Sunday, which, due to its introit in the early church, is somewhat confusingly termed “Jubilate Sunday”, although the texts for the occasion, like all Bach cantatas dedicated to it (BWV 12, 103, 146), focus more on lamentation and rejection of the material world.
This theology of suffering is illustrated more particularly in the alto aria by means of the medicinal metaphors “physician”, “wounds” and “balm”. Arching over a staccato bassline, the upper parts lend the somewhat ponderous setting a certain agility that is given a note of naivety through the fragile timbre of the sopranino recorder. That this unusual part – something of a “sacralised Papageno” – was rewritten for transverse flute or solo violin for a later performance in 1731 may be seen as an effort to lend the setting gravitas and elegance.
The alto recitative counters the tenor’s lament to God with the confident expectation of Jesus’ speedy return. Here, Bach revisits the contrasting images of the introductory chorus by skilfully transforming the expressive recitation of “sadness” into a joyful melisma of “gladness”. The ensuing tenor aria “Recover now, o troubled feelings” is one of the most popular cantata encores written by the Thomas Cantor – and not without good reason. Conceived as a lively D-major bourrée with brilliant trumpet fanfares, it combines a no-nonsense “modern” character of expression with a finely nuanced interpretation of the “troubled feelings” and “excess of woe” described in the text. Although Bach’s elaborate construction for the setting does not always let the heroism of the text shine through to full effect, this in no way reduces the charm of his venture into a forward-looking, popular compositional style.
The closing movement, set to a chorale verse by Paul Gerhard, effectively summarises the cantata’s underlying message: abandonment and despair “shall be to joy and lasting health converted” – to be sure, a comfort “past all measure”, but one redolent of “German quietism”, for which philosopher Ernst Bloch not unduly censured the Lutheran Reformation. Yet although this humble wait can be related to the Sunday reading from the first epistle of Peter (one fully in thrall to authority), any indications of actual relief from earthly privations are sought in this movement – indeed throughout the entire cantata – in vain.