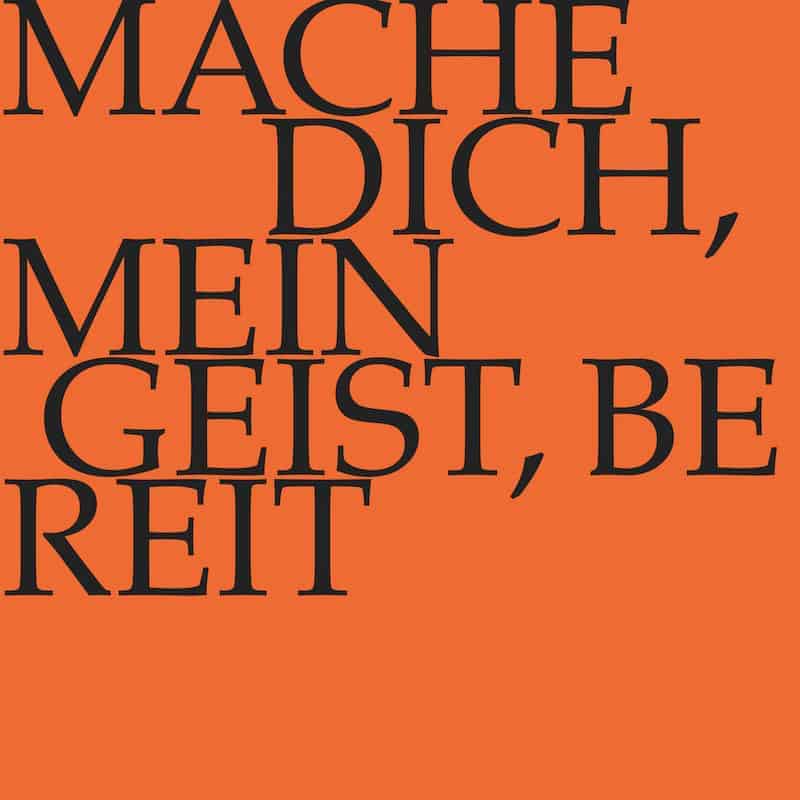 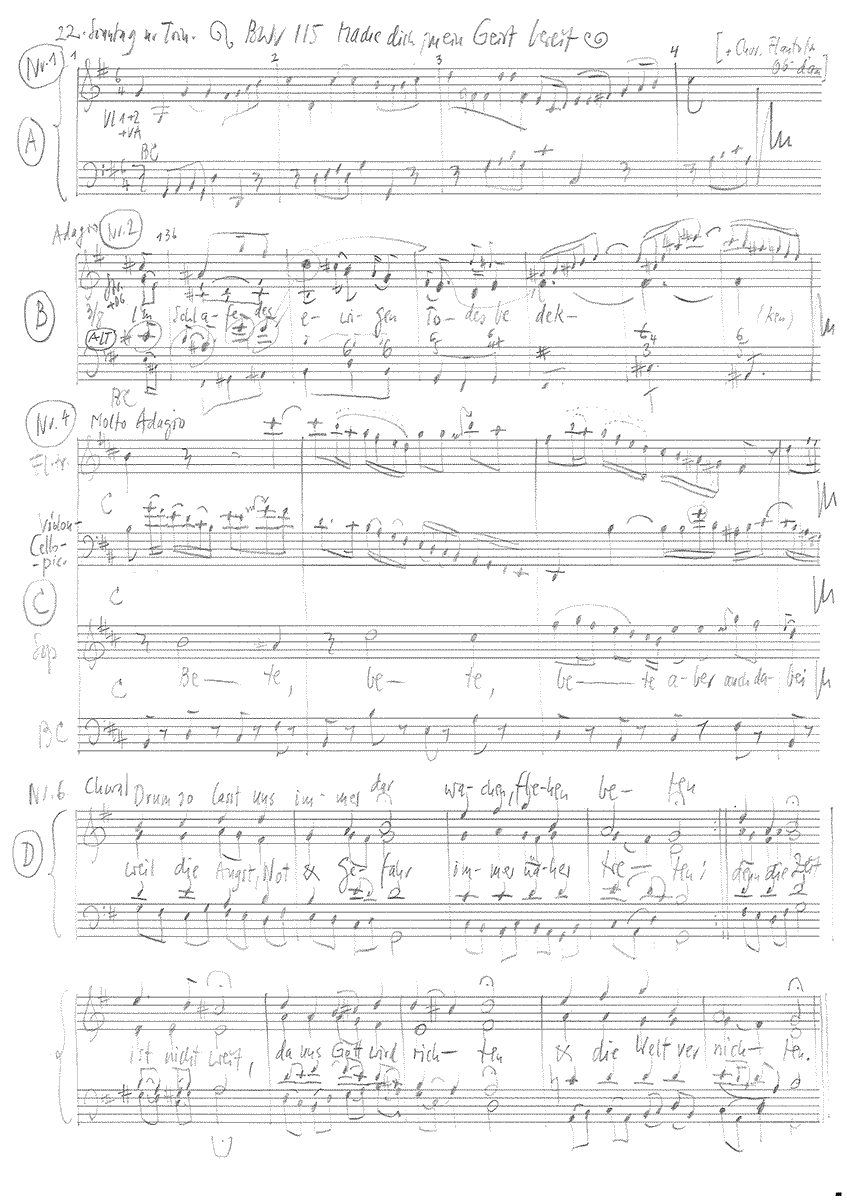 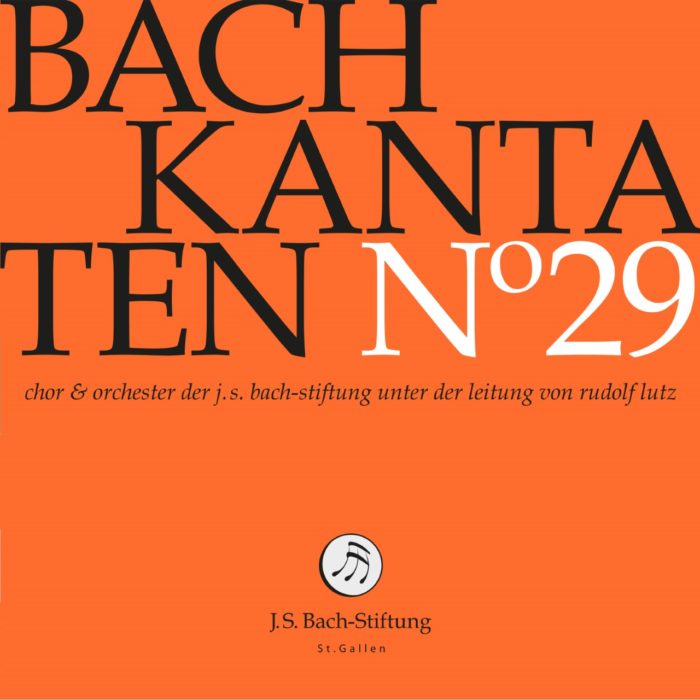 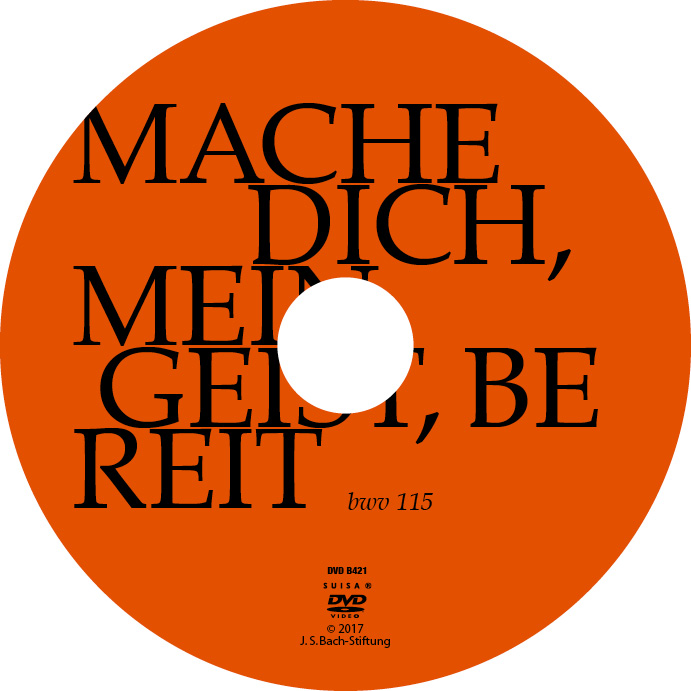 The chorale cantata “Mache dich, mein Geist, bereit” (Get thyself, my soul, prepared) BWV 115 was composed for the 22nd Sunday after Trinity in 1724 and thus forms part of Bach’s second Leipzig cantata cycle. Surviving transcripts and partial copies of the work from after 1800 indicate that August Eberhard Müller (Thomascantor from 1800/04 until 1810) continued to use the cantatas in church music, a decision motivated in equal parts by practicality and respect. It should be noted, however, that these performances are not an early form of a “Bach renaissance” but rather represent a swansong in baroque church-music practice.

The introductory chorus opens with a twovoice continuo part and unison strings, whose admonitory figure of repeated notes and erratically circling gestures serve to caution humankind against the unforeseen “evil day” of judgement. Although the unexpected entry of the woodwinds, transverse flute and oboe d’amore somewhat brightens the timbre of this gruff, stringent music, it does little to soften its motivic rigour. Amid this setting – hampered as it seems by a theological handbrake – the choir, supported by horns, enters with the first chorale line, whose block-like presentation nonetheless features some fine timbral effects, such as on the words “Bete” (pray) and “Versuchung” (temptation). Within the confines of this efficiently constructed movement, Bach also skilfully distinguishes certain passages in the orchestral writing. For instance, at the transition to the final chorale line, the unison string passage appears as a lifeline tossed dramatically to save the choristers from the treacherous swamp of a heedless life.

This gesture of warning is taken up again in the alto aria, in which neither the soothing 3/8 - metre nor the warm timbre of the oboe d’amore can mask the underlying gravitas of the music, which echoes the bittersweet tone of a Passion setting. Here, the endangered soul must be woken from the sinful slumber so temptingly portrayed by the rocking quaver line – what the loving calls of the alto fail to do, the threats of the allegro middle section, whipped on by cracking lightning, are quite able to manage. Indeed, it is audibly clear that no human can escape God’s triumphant justice, and thus sleep as a symbol of eternal death can – despite the lulling tones of the music – no longer be seen as a source of consolation.

This punishment, while deferred for now, hangs like the sword of Damocles over the following bass recitative. Although the setting speaks of God as the loyal watchman of the soul, his disappointment in a world debauched by Satan pervades almost every bar. The movement portrays more a resigned King Lear than a dazzling Lord on High who castigates the “false brothers”.

In keeping with this theme, the soprano aria, a poignant molto adagio setting, projects a funereal tone from the very first note. In an expressive duo of transverse flute and violoncello piccolo, a fragile, enticing soundscape emerges with a barely audible continuo line of inimitable subtlety. Bach’s true object, however, is first revealed with entry of the soloist, who speaks of prayer as the fundamental expression of the human condition – the music is radical in its very stillness and transforms the sincere pleas of the vocalist into a provocative chastisement of a loud and egotistical world. Why precisely this heartfelt simplicity can serve as a path to mercy and new strength is explained in the following tenor recitative: God opens his ears when we call to him with sincerity, which is also why he selflessly gave the world his only son, whose vital help is portrayed in the arioso closing phrase as encouragement that accompanies humankind every step of the way.

The closing chorale, a verse from Johann Burchard Freystein’s hymn of warning, thus serves to decisively fortify the reformed congregation of singers. With its unadorned progression and culmination in a glaring major chord, the setting mirrors the eschatological gravitas of Freystein’s theologising verse, which is not only resigned to the impending destruction of the world, but even emphatically welcomes it.