(I stand with one foot in the grave now) for soprano, alto, tenor and bass, oboe, strings and continuo.

Cantata BWV 156 is distinguished by its poignant language and intimate scoring, and thus resembles the compositions of Bach’s Weimar period. But in fact, it belongs to the works that Bach, at least in part, composed for a text cycle by Picander, Bach’s “house poet” in Leipzig, and that was most likely first performed on 23 January 1729. The original parts are lost, and even the oldest surviving copy of the score probably did not find its way back to Leipzig until 1756 when Johann Friedrich Doles took up the position of Thomascantor. Nevertheless, there are an astounding number of copies remaining from around 1830, indicating that this cantata particularly appealed to Bach’s admirers from the romantic period. 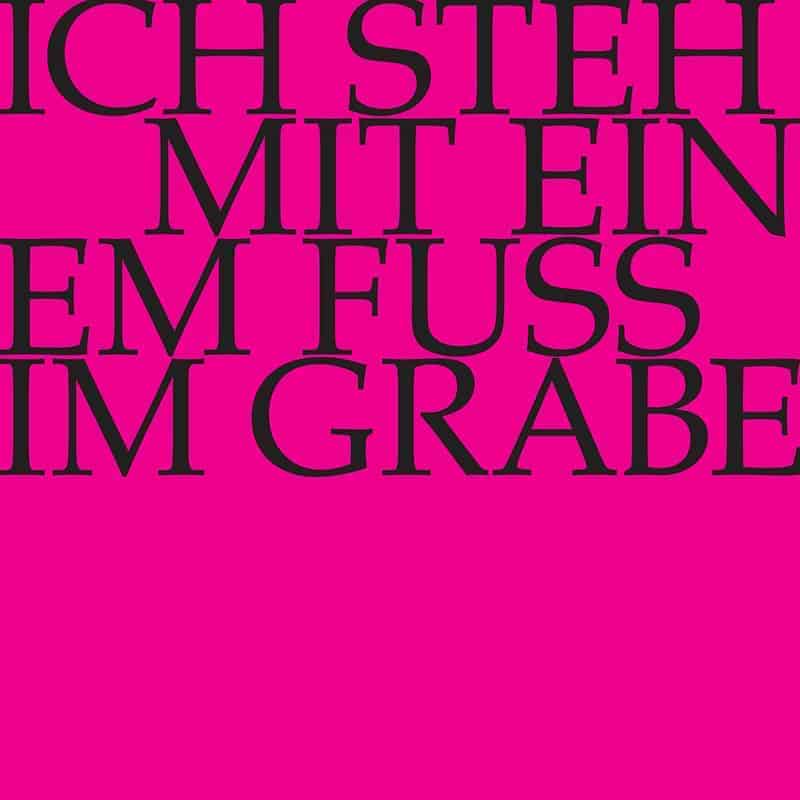 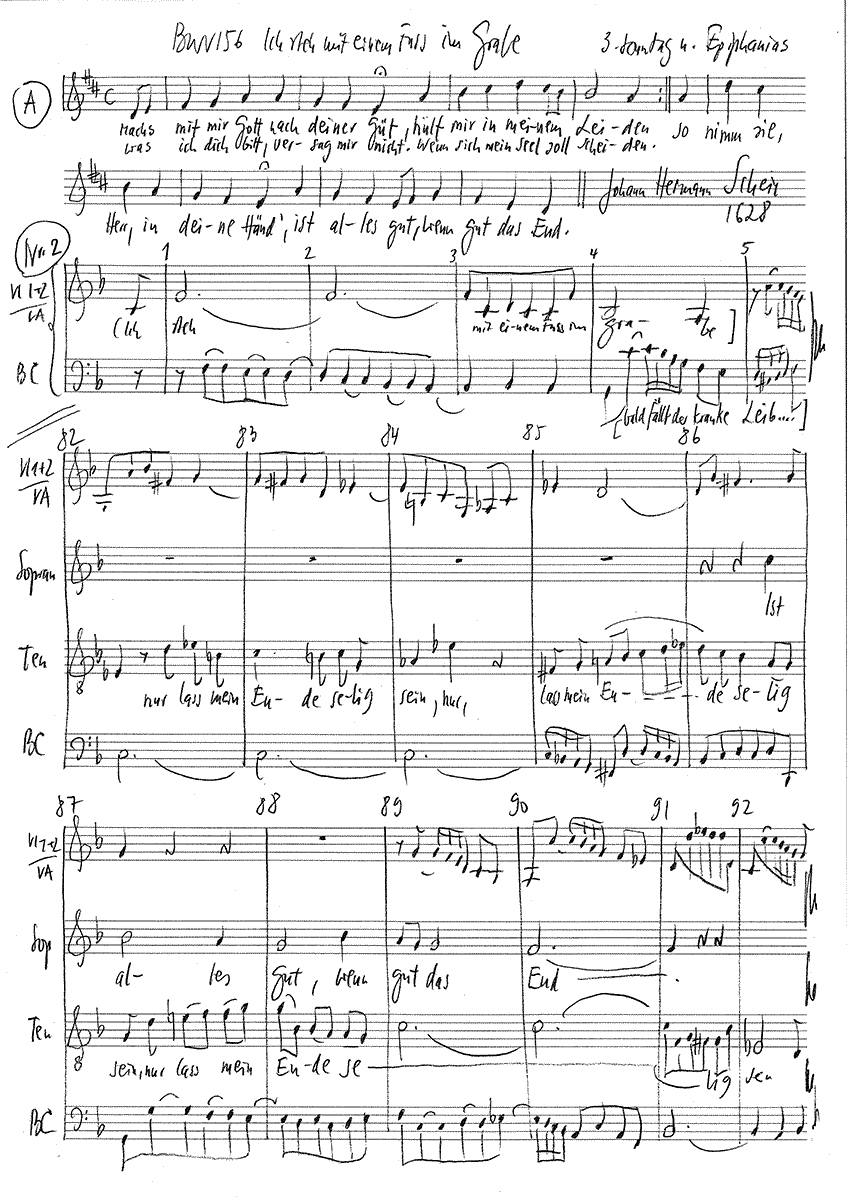 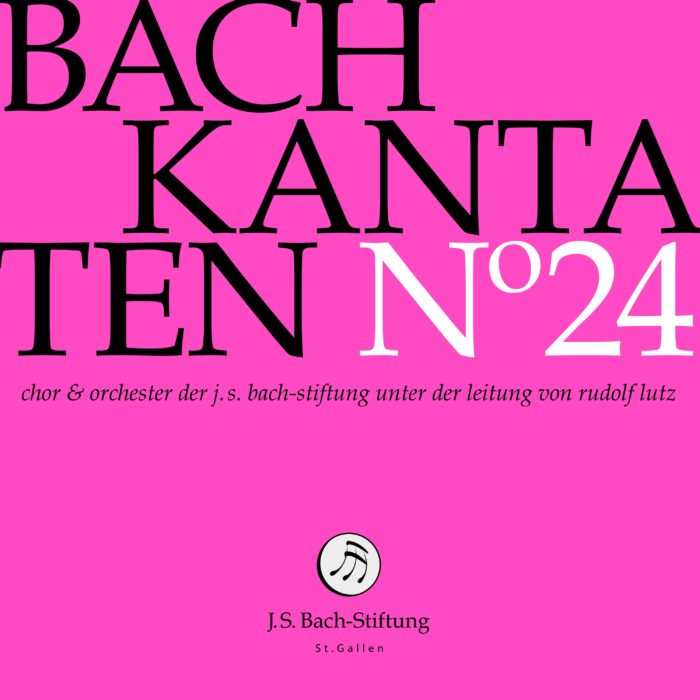 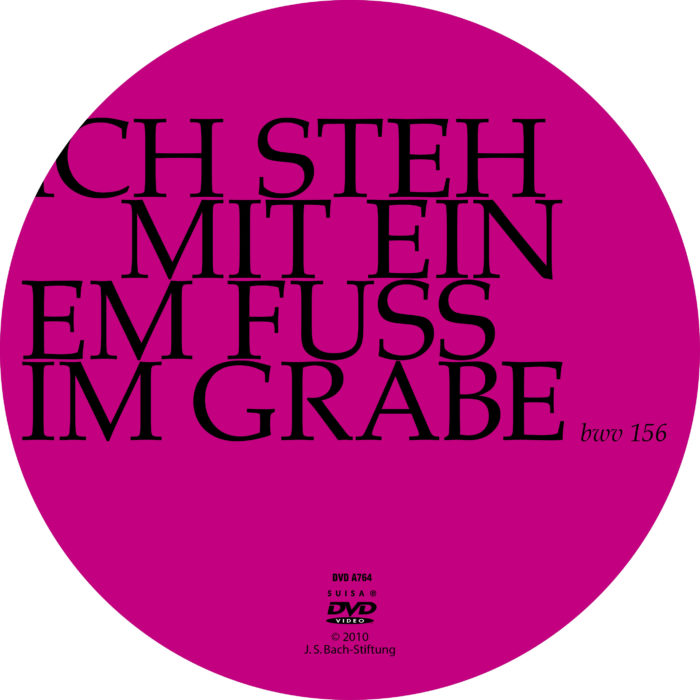 The opening sinfonia, which Bach later reused as the middle movement of his Harpsichord Concerto in F Minor BWV 1056, is probably based on an older composition from Bach’s Weimar or Cöthen period. More famous than the cantata itself, the sinfonia sets a dreamy oboe cantilena over a simple accompaniment of gentle bass notes and off-beat strings, thus embodying a contemplative faith that could also be understood as a peaceful “Méditation sur ma mort future” due to the libretto’s reflection on death. Although the adagio movement is only 20 bars long, it is complete and well-rounded in ternary form, concluding with a mini-coda that transitions to an open finish on the dominant.
The tenor aria with soprano chorale sustains the gentle tone of the opening movement; set over descending continuo sighs, the unison line for violins and viola, derived from the head motive of “I stand”, sounds almost as if played with mutes. Nevertheless, considerable contrapuntal finesse lies hidden behind the trusting mood conveyed. In particular, Bach’s interpolation of a soprano cantus firmus – the hymn on death “Deal with me, God, of thy good will” – displays great skill: while the early insertion of the first chorale line seems almost premature, the final comfort found in the hour of death (“For all is good, if good the end”) is first granted with dramatacised delay. Indeed, the aria provides an apt example for the significant contrast between the baroque Ars moriendi and modern perceptions of death. A line such as “I stand with one foot in the grave now, soon shall my ailing corpse fall in,” sounds gruesome today, but in view of the “prepared house” in Bach’s theologically rooted interpretation, it could be seen in his times as a comforting promise. Nonetheless, Bach keenly understood human nature and did not obscure mortal fear of the hour of death and eternal damnation (“Just let my end with blessing come!”) – the collective support of the venerable chorale is precisely what is needed.
The bass recitative then presents an earnest meditation in which all rests in the hands of a loving God and acknowledgement of personal sin is put forth as the condition for receiving mercy (“Let thy dear kindness greater be than justice rightly bids”). Like the two halves of an hour-glass, the arioso closing sets earthly life and imminent heavenly joy in a temporal relationship (“The longer here, the later there”), an idea that the general bass aptly underscores with a hesitant ascending figure.
The alto aria “Lord, what thou wilt shall be my pleasure” again provides a clear reference to the Gospel of the third Sunday and its theme of submission to God’s will as presented in the stories of healing the sick in Matthew 8, in that Bach employ’s the key phrase “Lord, what thou wilt” as a musical device. The movement, set in the comforting key of B-flat major, features a fugal setting for oboe, violin and a light-footed continuo in which the lines of the alto soloist are thematically inserted. The expansive vocal lines that close the A section reflect not only the work’s interpretation of joy, suffering, death and supplication, but also Bach’s efforts to make himself clear to his audience.
In the second bass recitative the soloist resumes his observations, expressing a desire for bodily health and, more importantly, health and integrity of the soul. In Bach’s hands, the verse from Psalm 73 “And if my soul and body fail, yet thou art, God, my strength, the portion of my heart!” – a frequently quoted line in baroque compositions on death – is lent a sensitive and refreshing musical language.
The cantata closes with a chorale verse set to a masterfully succinct text by Kaspar Bienemann. Despite its compact form, the exquisitely harmonised four-part setting effectively highlights key words through expressive shading (“dying”) and half cadences (“let me forbear”). In this recording, the noble timbre of the accompanying instruments comes to the fore thanks to the small vocal ensemble and charismatic organ interludes.