Composed for the Third Day of Pentecost in 1725, the cantata “Er rufet seinen Schafen mit Namen” (He calleth his own sheep by name) belongs to a cycle of works set to nine texts by Christiane Mariane von Ziegler, the daughter of a patrician family from Leipzig. Bach worked on the cycle between Easter and Trinity Sunday of 1725, a period during which his choral cantata project had been temporarily abandoned. The cantata is distinctive not only for its colourful instrumentation, but also for the fact that the libretto draws heavily on readings from the Gospel of John – so much so that the American musicologist Eric Chafe suggests the work should be viewed in connection with Bach’s St John Passion. 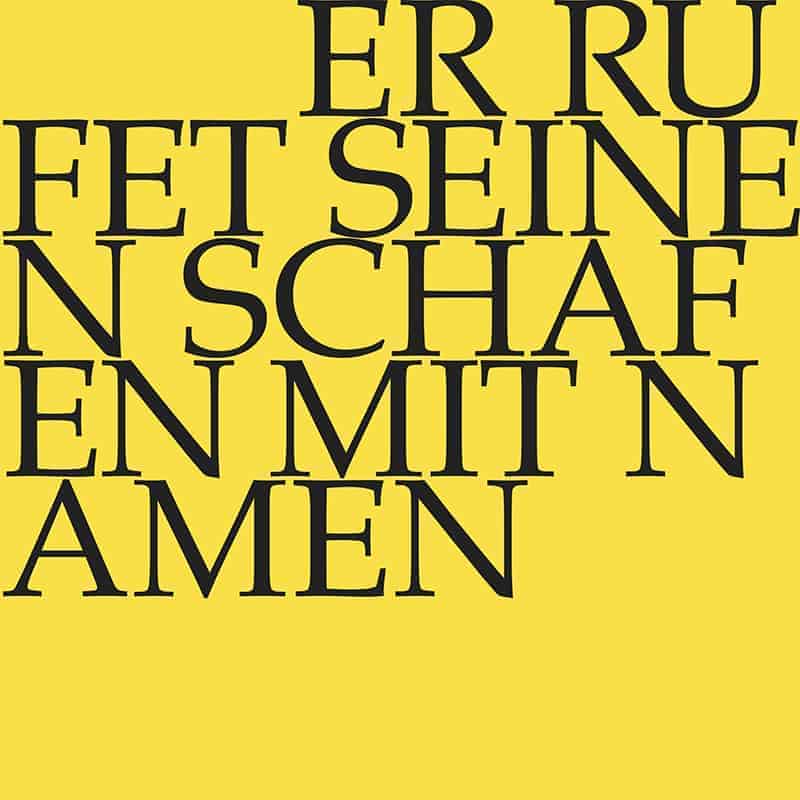 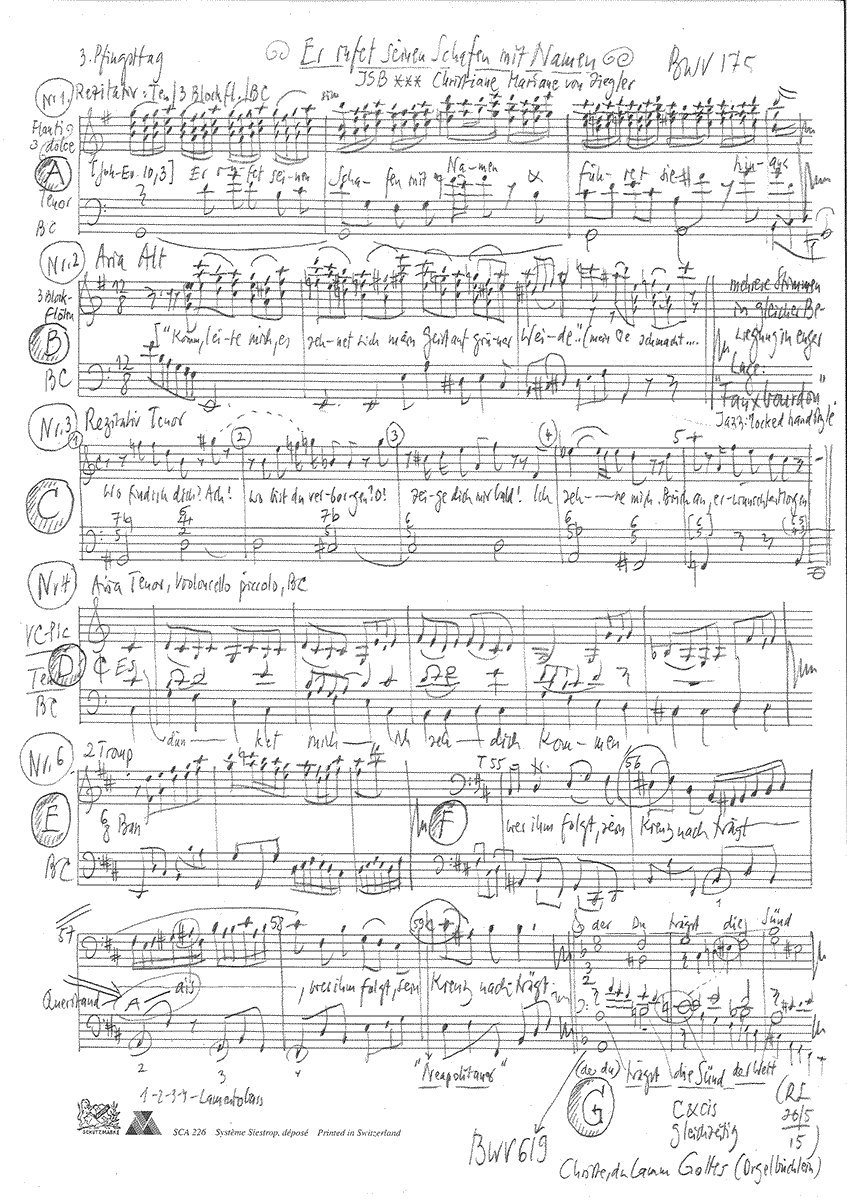 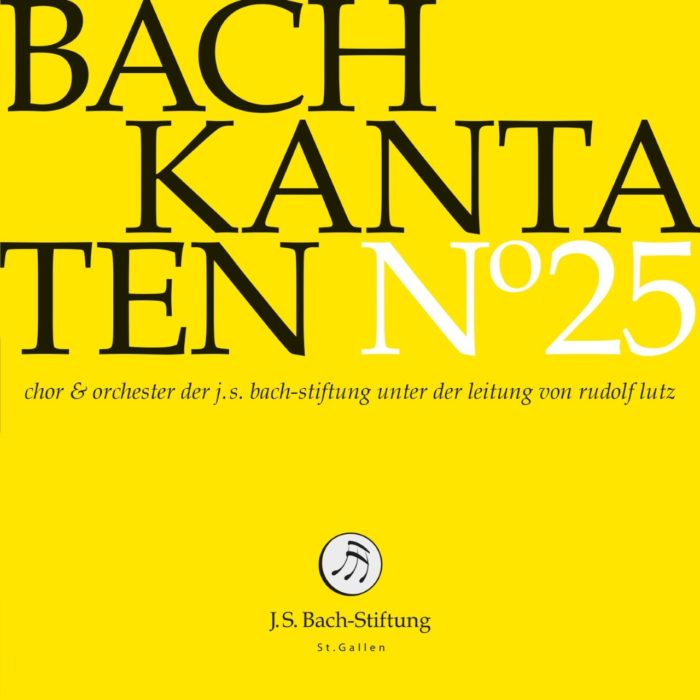 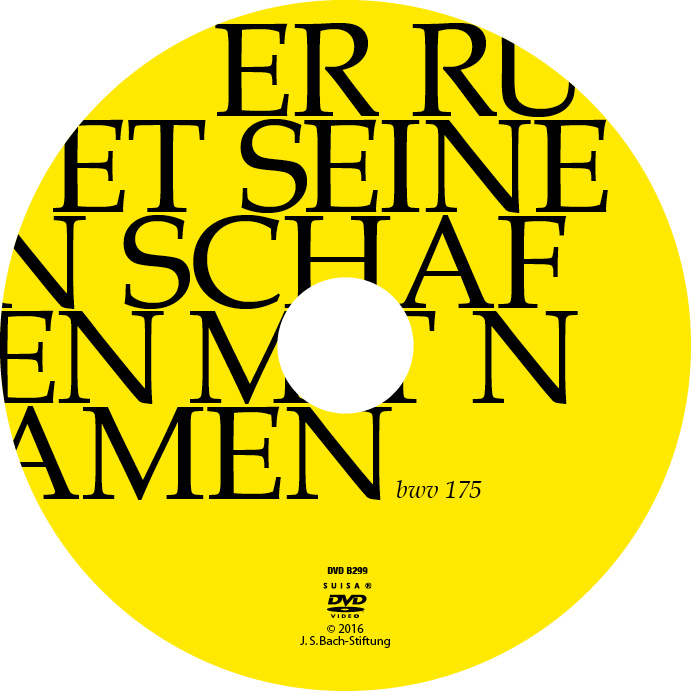 The introductory movement presents a quotation from the Gospel of John (“He calleth his own sheep by name then and leadeth them outside!”) accompanied by the pastoral tones of three recorders, whose gently undulating lines distinguish Jesus as the loyal shepherd. This scoring – unusual in Bach’s oeuvre – also characterises the following alto aria “Come, lead me out”, which conveys a deep personal conviction of the biblical promise. With their whispered sounds of longing (“My heart doth yearn”), the recorders bring to this movement the distinct level of meaning that, in addition to the memento mori and pastoral allusions, the instrument embodied in the baroque period. This siciliano setting sustains the key of E minor throughout and, with its descending figure, alludes to a transience and grief that captures the mood of Jesus’ words of farewell so prominently placed in the Gospel of John.
The tenor recitative, a questioning search for the beloved shepherd, is underscored by instable harmonies that ultimately resolve in an energetic gesture of awakening (“Break forth, O welcome morning!”). By contrast, the ensuing aria is accompanied by a sonorous violoncello piccolo whose clear timbre gives cogent expression to the “voice so graceful, so full of love and gentleness” of which the tenor sings. The violincello piccolo then takes up a lively duo with the bassoon in the upper register, a parody setting based on the birthday cantata “Illustrious Leopold” (BWV 173a) composed in Cöthen. Although the flattering Cöthen original – “Thy name shall like the sun go forth” – was likewise accompanied by obbligato violoncello and bassoon, in his sacred parody version, Bach nevertheless had to fit in an additional four lines of text.
The third recitative, an intentional disruption, features a dialogue in which the voices portray atypical roles: the alto, which usually represents the human soul, expresses the incredulity of the disciples as described in the Gospel, while the bass, often the personification of Jesus, speaks of the fallacy of human reason, likening it to a form of spiritual deafness. In this setting, the bass soloist shifts swiftly from the role of an earthly sinner (“We mortals”) to an energetic preacher who implores his people to embrace Christ the Saviour; the fact that the string parts become lively and quicken upon the mention of Christ’s name may be viewed as a recurring topos in Bach’s oeuvre.
The following bass aria “Open ye both ears and listen”, by contrast, is one of Bach’s most remarkable creations. Drawing on Italian models, Bach relies on an orchestration including two trumpets but no timpani – unique in his oeuvre – to render a powerful scene of Lutheran victory that transforms the will to hear the Good News into an acoustic phenomenon. Despite the occasional fanfare, the trumpet parts are markedly cantabile and consonant, and are quite demanding on the musicians – with quiet triumph and no sign of servility, they present the Easter prince as 47 a friendly leader who wields his power only at a distance. Although the setting has not been identified as a parody, it is not implausible that at least the da-capo framework is based on an earlier secular work; the middle section, by contrast, is clouded by pained tones that serve as a reminder of what living a life of Christ actually involves (“Who obeys, his cross doth bear”).
With the return of the recorder timbre in the closing chorale, the movement is lent a Pentecostal brilliance that brings the work full circle. This powerful setting to Johann Rist’s pithy hymn verse is borrowed from the Pentecost cantata BWV 59, which, accompanied by strings only, was set to Luther’s text “Come Holy Spirit, God the Lord”.