Cantata BWV 20, the first work in Bach’s second Leipzig cycle, was composed in 1724 for the First Sunday after Trinity. Based on a hymn by Johann Rist (1642), the libretto explores the theme of eternal damnation as told in the parable of the rich man and Lazarus (Luke 16), thus providing Bach with the framework for a veritable “music of terror” that torments the listener with the prospect of God’s eternal punishment while dramatically charging us to reform our ways and reject worldly pleasures. 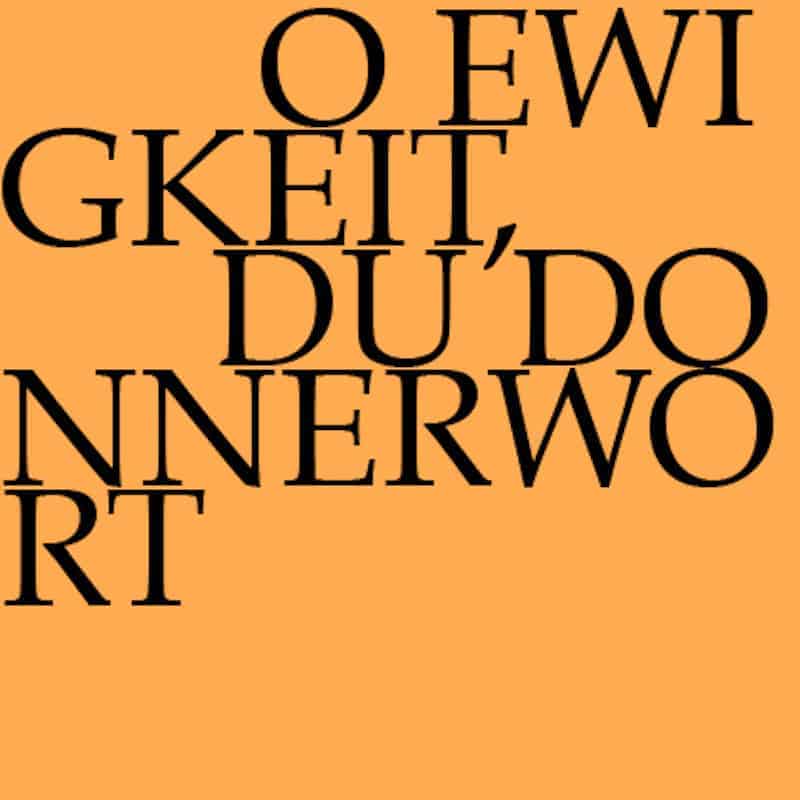 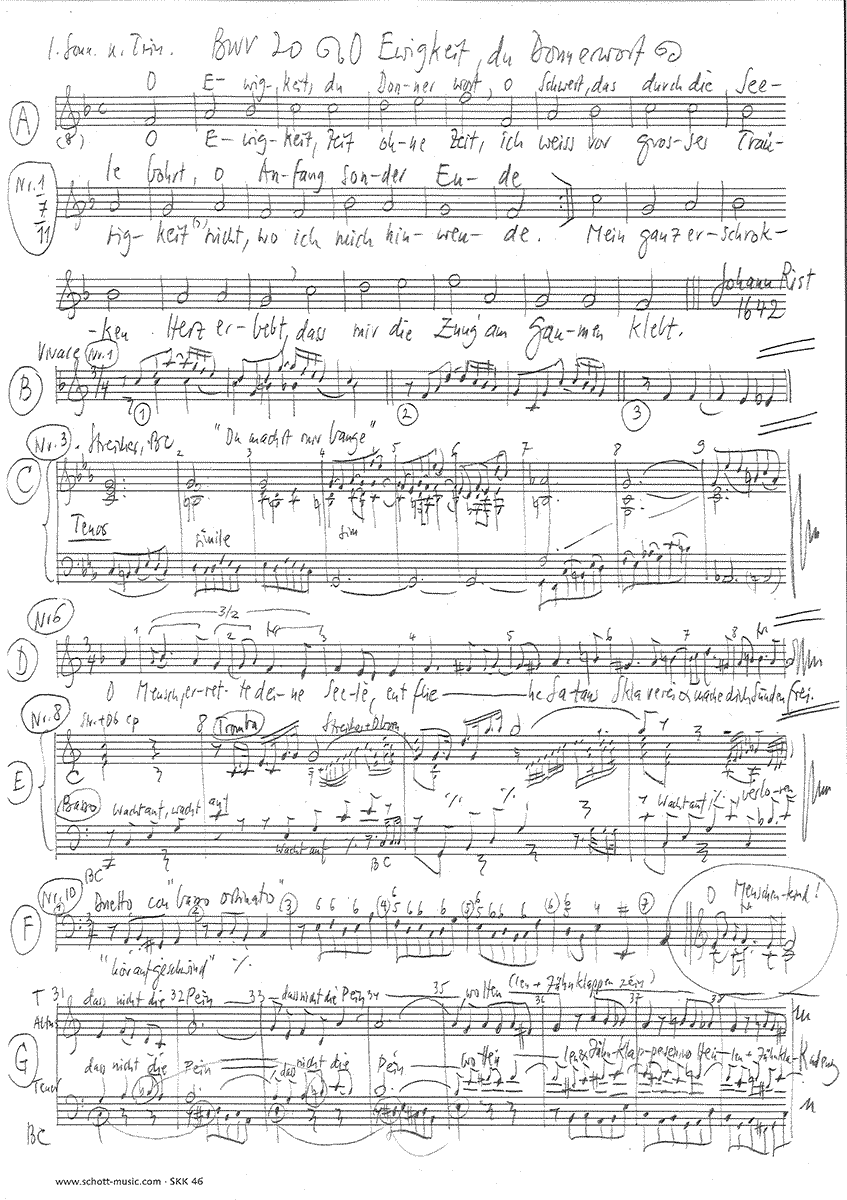 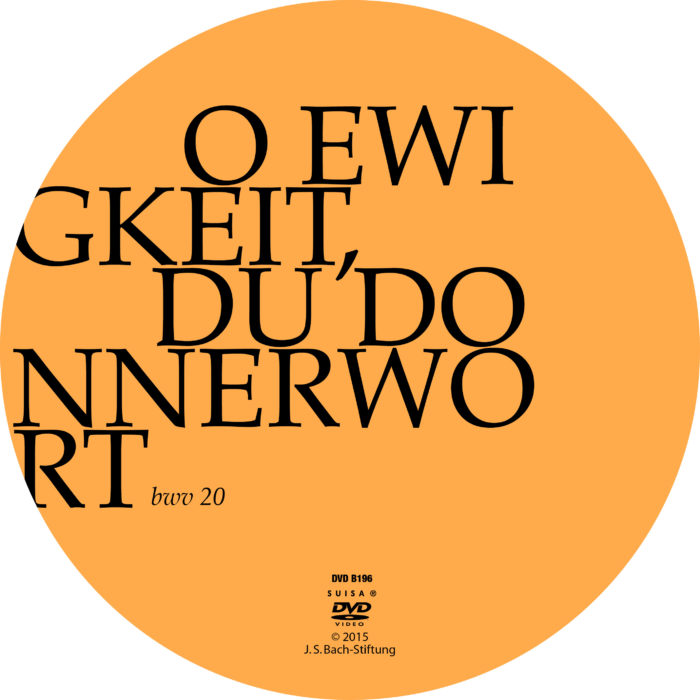 A particular characteristic of the chorale cantata cycle is the immediate introduction of the hymn text within the orchestral overture, a concept that Bach realises in exemplary fashion in the introductory chorus by creating two complementary planes of music. On the first, the arrival of the heavenly Lord and our fear of his judgement – the “sword that through the soul doth bore” – are depicted by the strings in the typical dotted rhythms and short, rapid figures of the French overture, while on the second, the oboes illustrate the word “eternity” through sustained long-notes in gradual, measured steps – a setting that not only achieves the scenic realism of the “thunderous word” but also captures the textual ­import and permanence of “eternity”. These planes prevail in constant thematic exchange between the instrumental groups almost throughout the entire movement and serve as a potent reminder that humans, in their fallibility, are perpetually torn between these conflicting spheres and that the dimension of “eternity” is ever-present as both a threat and a promise.
Bach integrates the chorale line for line into the orchestral material, reinforcing the soprano melody with a slide trumpet. When the lively triple time of the courtly overture emerges in the middle section (somewhat at odds with the sorrowful text and severe harmonies), humanity seems to be overwhelmed by the force of a punishing power, one that is just as much beyond its comprehension as the complexity of the fugue that is almost lost in the flowing music. After building up to an unexpected climax, a series of exclamations by the strings and woodwinds in contrary motion closes the movement, invoking a deep sense of horror. In the grip of this bodily experience of despair (“So much my frightened heart doth quake, that to my gums my tongue doth cake”) every remnant of peace and comfort has departed. It is difficult to conceive of an overture ending in F major ever expressing more devastating severity.
And yet the first recitative and tenor aria only serve to intensify the message of perpetual damnation (“endless time, thou mak’st me anxious”), with the ritornello of the aria taking up the sustained “eternity” motive of the overture, and the small intervals illustrating the trembling “anxiety”. In the B section, the spectre of hell is then conjured up in a flourish of baroque figures, yet the “flames which are forever burning” do not erupt from the orchestra, but from the soloist in a massive coloratura figure, evoking not only the judgement at the end of time but also revealing the mental processes of Bach’s extraordinary, and ultimately healing, creative genius.
With excessive power and eloquence, the ensuing bass recitative then contrasts time and eternity ere the bass aria justifies humankind’s self-inflicted torment in a dancelike, yet impassively dogmatic interpretation: “The Lord is just in all his dealings: the brief transgressions of this world, he hath such lasting pain ordained”. And, although the following alto aria “O man deliver this thy spirit” is a summons to “take flight from Satan’s slavery”, the vocalist can hardly break free from the resolute sarabande of the strings. Accordingly, the chorale verse leaves little scope for optimistic self-deception: “So long a God in heaven dwells, and over all the clouds doth swell, such torments will not be finished.”
Following this most terrifying sermon, the second part of the cantata continues in a similar vein, with the bass aria and its brilliant trumpet motives warning against “error’s slumber”. The recitative “Forsake, O man, the pleasure of this world” then numbers the ruinous sins under the threat of an untimely death, ere the alto and tenor, in a duet accompanied solely by succinct continuo figures, implore the worldly to see the error of their ways. Despite these well-meaning appeals, the allusion to the parable of the rich (every)man, the emphasis on the word “pain” in the harrowing opposition of the vocal parts, not to mention the closing chorale clearly reveal the threat of punishment to be omnipresent. Seen in this light, the abrupt turnaround in the final chorale line “take me then when thou dost please, Lord Jesus to thy joyful tent!” expresses a resigned acceptance that sorrow, pain and agony of the soul are never-ending in this world, and that it is beyond the power of humans alone to overcome them.

No time for redemption?

The text of the cantata “O Eternity, Thou Word of Thunder” radicalises the possibility of divine punishment and speaks of the most terrible: the torments of sinful man can be infinite. The mystery of redemption seems far away, for the question of the hereafter remains unanswered and, translated into the here and now, becomes a question of conscience. Bach’s music, however, undermines the horror scenario and offers the reconciliation with which the word has such difficulty.

A monstrous text! Hardly reconciliatory, it has absolutely nothing of what today’s pastors and priests proclaim from their pulpits, no, rather not proclaim, but rather scatter among the people more or less casually as weak good news.
Here the weight of despair, the fear of the great reckoning is strong. But not only that, perhaps the fear is even greater that the reckoning and also the possible redemption could be delayed for all eternity. A deeply sinister thought, indeed.
The measure of time that is being taken into consideration here cannot really be grasped by man. Suppose the torment of the damned lasted longer than the earthly time envisaged through millennia. However, trembling and fright would then also be gone, for no human soul, in whatever state it may be after death, can be frightened and tremble for such an unceasingly long time. The conjured “thousand million years” are nothing here. Flying hell time, which at the same time bears the stamp of the everlasting. Terrible, terrible, if there is to be no end to the torment, no hope glimmering beneath that there will be an end to it one day.
It is, of course, a fright text, a fright cantata. It is meant to make sinful people repent in view of the almost infinite punishment that awaits the sinner in the background. For the sin is short, the life of the sinner is short, and the punishment imposed afterwards is all the longer.
In any case, redemption does not approach from eternity, on the contrary, it is the terribly stretched time in which no trustingly elevated state of being can be established, nothing similar to paradise, nothing that could even come close to the heavenly Jerusalem.
And in the middle of the chorale, there is a little crazy passage in which a thought flashes up that actually borders on blasphemy, for it says of the inhabitants of hell:

“They will be tormented by cold and heat,
fear, hunger, terror, fire and lightning.
and yet not consume them.
For this torment will come to an end
When God is no more eternal.”