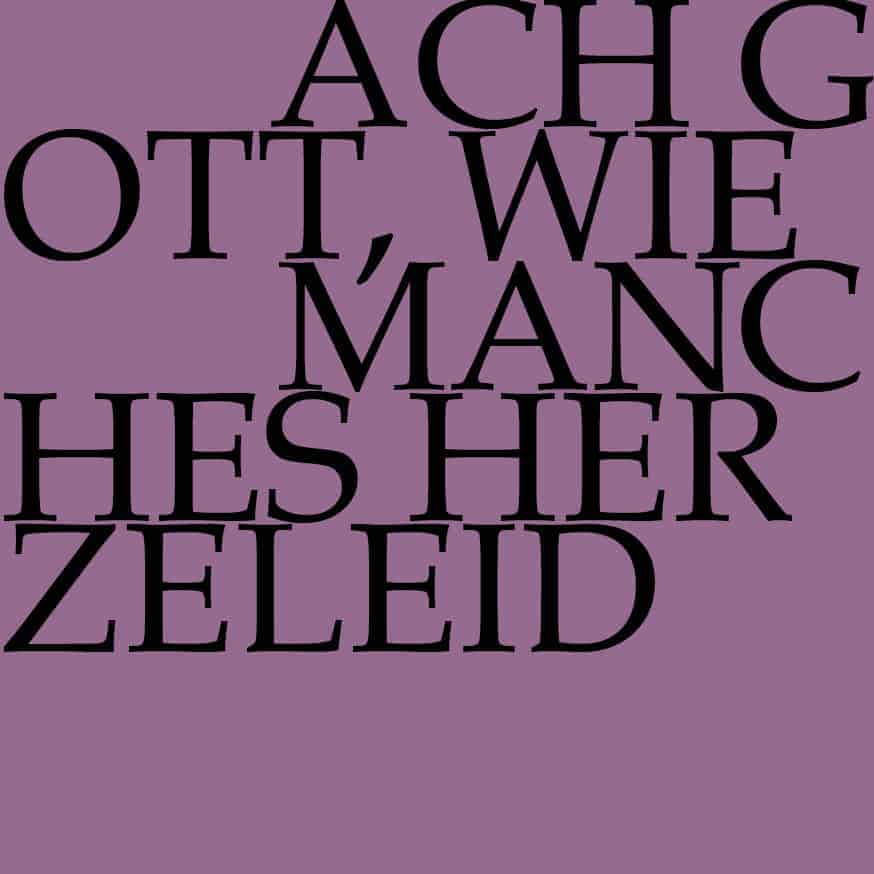 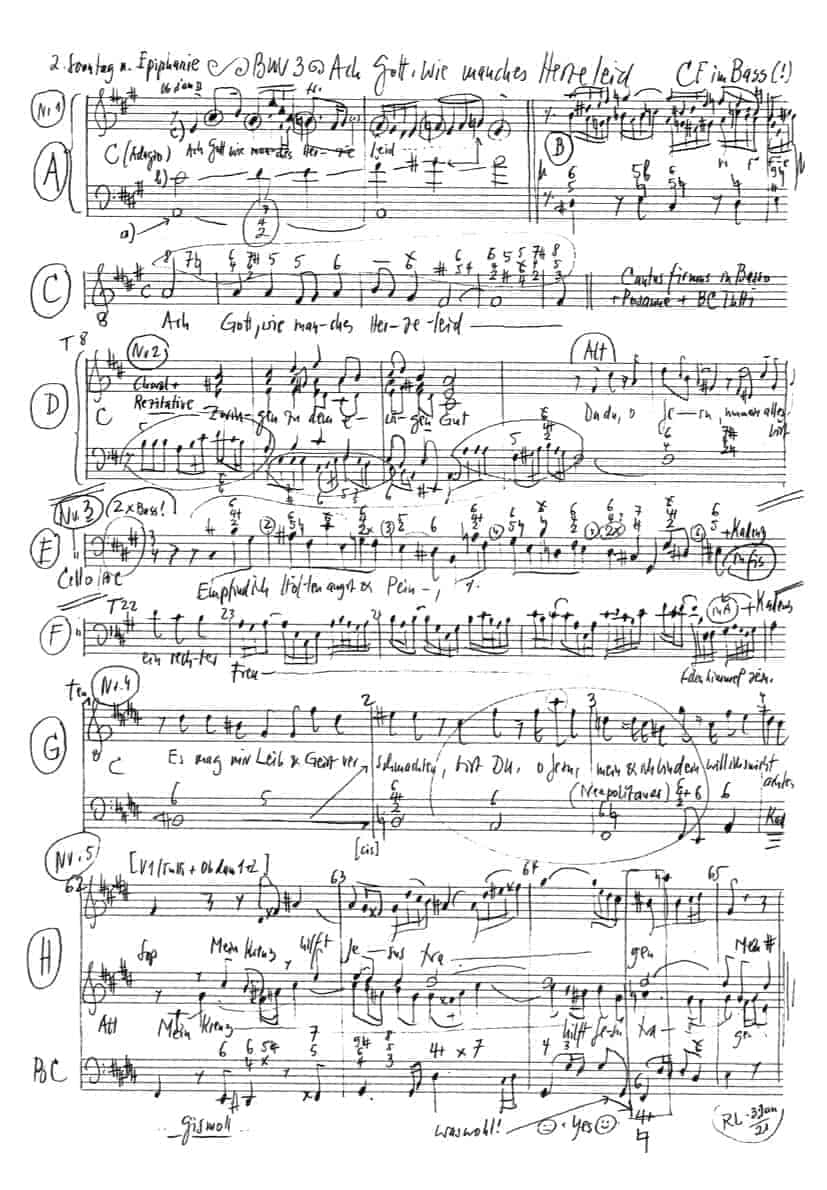 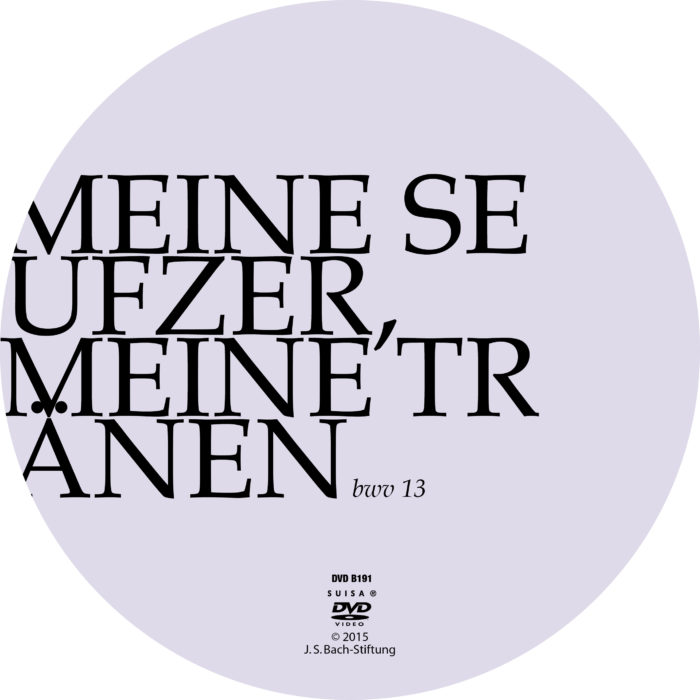 The movement is addressed to what it speaks of: to the heart. And that is where it creates resonance. What follows, however, does not reach my heart in any way. It speaks to the head – and the will. It is dominated by words like “should”, “must” or “may”. It is about “forcing” and about “wanting”. It is about a struggle of the subject with itself, about an inner conflict that, following an old language game, exists between “flesh” and “spirit”. Thus, the opening sigh in the second stanza is followed by a completely different theme, which no longer has anything to do with the heartache in this time – which is encountered in this time – but only with what the subject of this cantata observes in himself: with the difficulty of dominating, even “forcing” his own “flesh and blood” – to the point that the soprano laments quoting the Gospel:

The flesh is weak, but the spirit wants.

Instead of singing of the heartache that is encountered at this time, the cantata henceforth engages in self-referential reflections of the believing subject. Although this ends the resonance of the heart, it makes the cantata interesting for the philosopher. In what way?

The cantata is interesting because it provides insight into the genealogy of our thinking. What does that mean? Well, the way we think is not natural. It is the product of an intricate history, as a result of which a conception of man became established, according to which we now live, work, do business, organise our world and try in vain to master a global pandemic. This image of man has been called Homo Faber or Homo Oeconomicus – depending on whether one focuses on his obsession with technology or his egocentricity. Its most recent manifestation, if we follow the Israeli bestselling author Yuval Noah Harari, is Homo Deus, who pursues only one goal: to conquer death with the help of the most advanced technology.

But Homo Deus, Homo Oeconomicus and Homo Faber only became possible because, in the wake of the Reformation, the idea prevailed that man is the being who can will by virtue of his mind – and whose will to believe will decide whether or not there will be salvation for him from “final doom”. Our cantata now transports us, as it were, to the childhood of this image of man. From afar, there are still echoes of medieval Christ mysticism, but in the middle section – especially in the third movement – the self-reflection of a subject dominates, which on the one hand constitutes itself in the triangle of want, should and must, and on the other hand in relation to its flesh.

The focus on death is characteristic of the self-understanding that is formed here in statu nascendi, first in the Reformation and then in modern times. Martin Luther had let the faithful know in a Wittenberg Lenten sermon:

We are all called to death, and no one will die for the other, but each in his own person will struggle with death for himself.

Death thus became a memento mori, calling the believer to responsibility for his own life and salvation. It is now up to the believing subject to conquer “the fear and torment of hell”, which “may only call Jesus’ name”, in order to transform the terrors of the heart into a “heaven of joy”, or to “calm the fear of death, the terror of the grave” and “fill the breast with joy”. Therefore, it is only logical when the believing subject confesses in the fifth sentence:

When sorrows press upon me,
I will sing with joy
Singing to my Jesus.
My cross Jesus helps to carry,
Therefore I will say with faith:
It serves for the best always

Twice the subject confesses that it wants. It wants “joyful heaven” and “joyfulness”, it wants consolation, it wants salvation. And it relies entirely on a theological theory that demands this will:

Since thou hast come to the consolation of the whole world,
And took our flesh unto thee,
Your death saves us
From finite ruin.

As a finite subject, the believer sees it as his duty to expect his consolation and salvation from Jesus alone – for he is promised that both will be granted to him, provided he is willing to rely on this salvation. And in fact, the hoped-for comfort in his “fear and torment of hell” grows out of his will for salvation through Jesus. But all this is a purely cognitive operation that the believing subject carries out within himself. It finds comfort and salvation in itself: in its will to believe.

This self-referentiality is the unique characteristic of the new image of man that developed under the influence of the reformers in the 16th and 17th centuries and which resounds through our cantata. It proclaims man to be a willing subject who, by virtue of his will to believe, can assert himself against two opponents: against “need and want”, which he strives to transform into “wealth”, and against “death’s fear” and “grave’s terror”, which he must turn into a “heaven of joy”. In its way, however, are the impulses and inclinations of the “flesh”, which cannot be “forced” so easily. And that causes this subject “heartfelt grief”.

But is this also the “heartfelt grief” of which the first line of our cantata speaks? Is it the heartfelt grief that is encountered in this time? Is it a felt suffering that arises from the heart’s attachment to the world – from empathy with “this time” – this concrete time? Is it not rather a home-made suffering that grows out of the self-centredness of a subject concerned with its personal advantage – or its salvation and comfort; the suffering of a subject that wants to rely on its Saviour – and cannot do so as it would like?

The self-concerned modern subject that expresses itself here finds neither suffering nor consolation in its heart, but only in its head. And that is why my resonance of the heart ends after the second verse of this cantata. Until then, it touches my heart. But what comes after that is theory or theology. And unfortunately bad theology, because it has produced an image of man and a world that today cause me “heartfelt grief” – real heartache of despair at the self-referentiality of man. Especially at this time, especially in a pandemic that should actually encourage us to awaken from the trance of our self-reference and to develop a new sense of belonging, community and connectedness: with our fellow human beings and with nature.

Instead, we behave – in only a slightly modified way – much like the subject of our cantata. We are afraid of need and want, driven by the fear of death and the terror of the grave. We rely on our will, which relies on promises given to us and which we want to trust, even if we don’t understand them, for example: The (un)holy trinity of economy, science and technology will save us. Or: With the help of your will, your optimism or your positive psychology, you can transform your fear of hell into a heaven of joy – even if you have to “force” the sadness, the tiredness, the dejection, the weakness of your body to do so. If the subject of our cantata sees himself as the architect of his faith and thus of his salvation, the subject of the present sees himself as the architect of his happiness with the help of technology, science and economy.

The whole thing is tragic because our self-referentiality prevents us from taking the path that could really save us: the path with which our cantata begins: “Ah God, how oft a heartfelt grief I am encountering at this time!” Yes, I am encountering suffering at this time. It is not the product of self-centred concern for my well-being, but of the encounter with the world that touches my heart: with the despondent people who have lost their perspective of meaning in the pandemic or with the young people who see themselves cheated of their youth. But it is not only them who cause me heartache, but also the empathy-free politicians who govern us, or the saturated beneficiaries of the crisis.

Anyone who goes through the world mindfully and doesn’t think that there must always be a “right heaven of joy” in his heart will feel plenty of “heartfelt grief” – and the “heartfelt grief” will tie him back to what he is not himself. It will free him from self-reference and make him aware of his connection with other people and nature. It will break the sinister image of man of modern times, which has sprung from a sinister Reformation theology. Heartache can become the source of a new reconnection – religio in Latin – to the being of this world, the source of a new image of man that has its centre in the heart and not in the will and that interprets man as a relational being who does not find fulfilment in self-reference but in the encounter with the other. Martin Bu-ber, the great Jewish religious philosopher, once said:

All real life is encounter.

That is probably true. Even – or even especially – when the encounter causes heartache. “Ah God, how oft a heartfelt grief I am encountering at this time!” – And that is good.