Recent research has corroborated the long-held assumption that Bach composed the greater part of his Leipzig cantatas during his first years there as Thomascantor. From 1730 onward, he then parodied many of these works, reorganizing them in new compilations such as the Christmas Oratorio and the four short masses BWV 233 to 236, thus maximizing the fruits of his earlier labours. The St John the Baptist cantata “Freue dich, erlöste Schar” (Joyful be, O ransomed throng) BWV 30 is one parody composition of this time, and despite being one of Bach’s latest sacred works, it is based on a homage cantata “Angenehmes Wiederau” (O most charming Wiederau), which he composed in 1737 for the Saxon court official J. C. Hennicke. 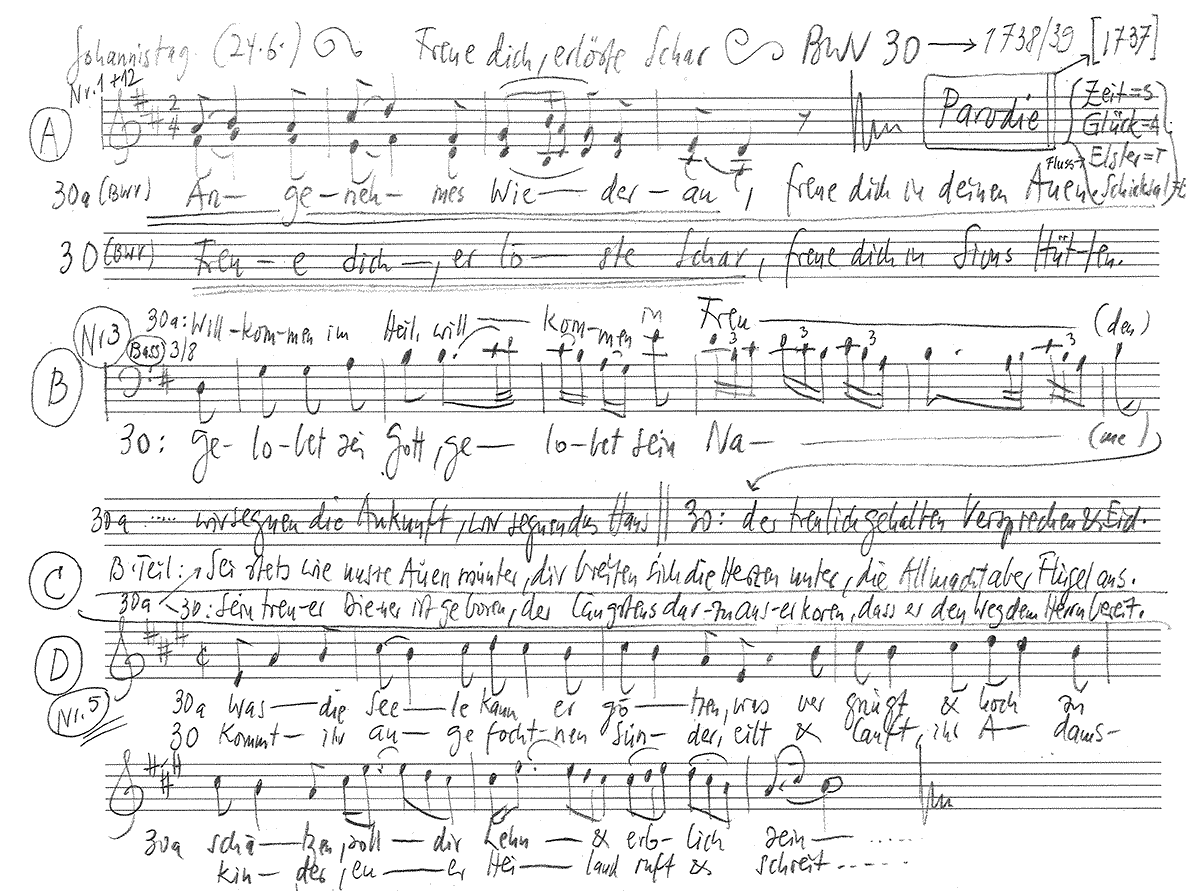 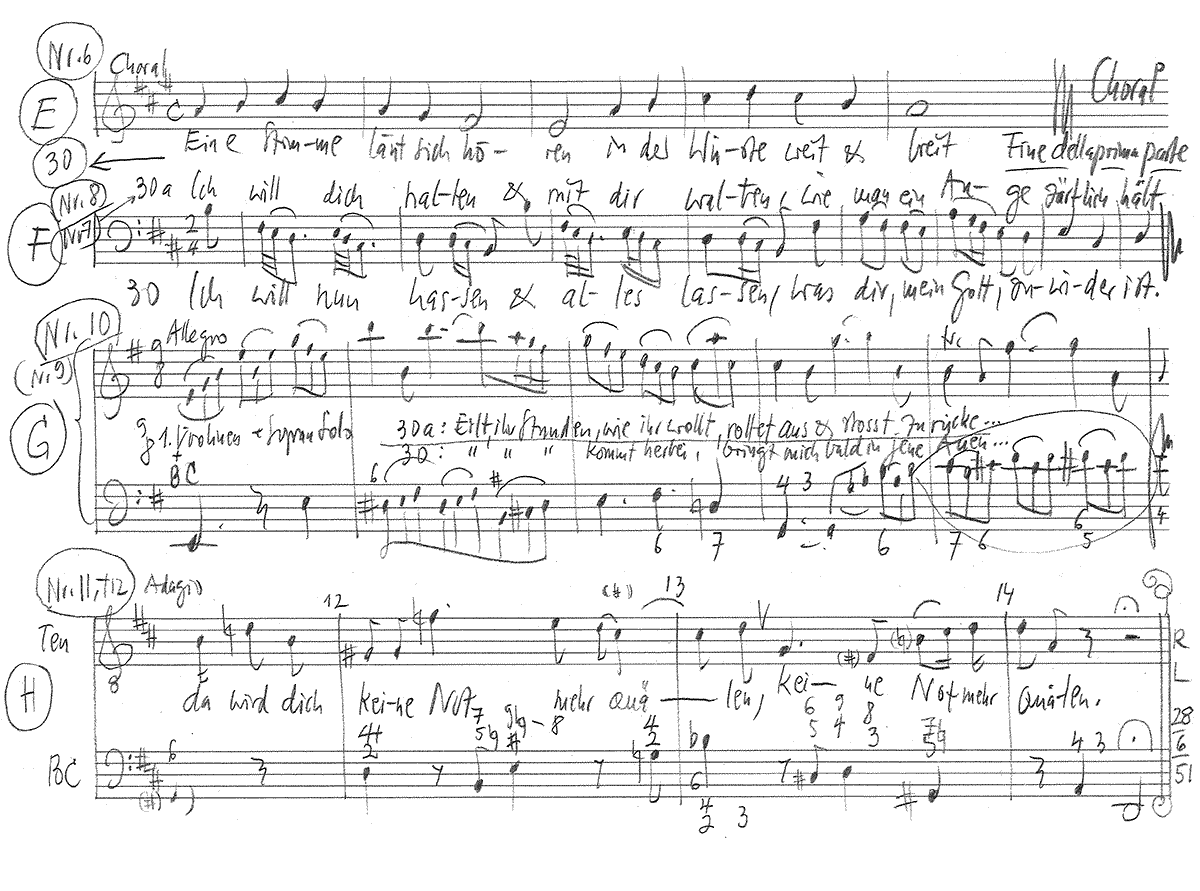 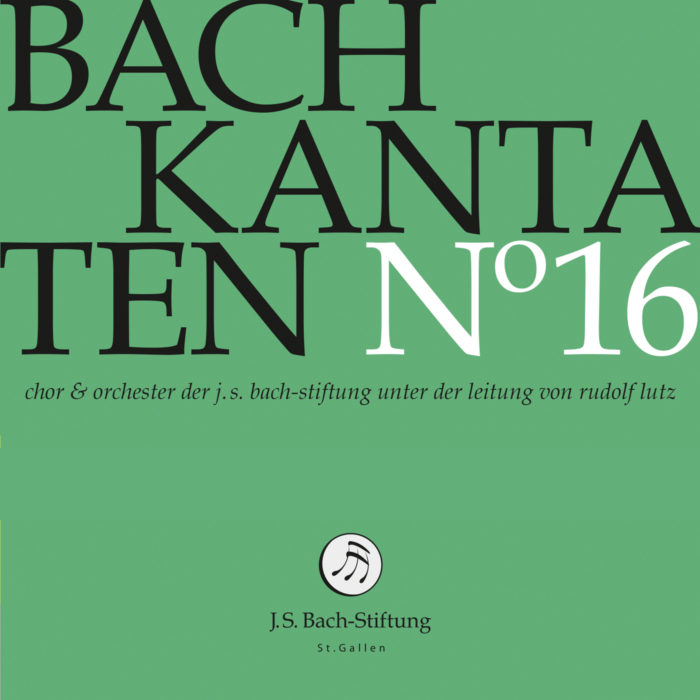 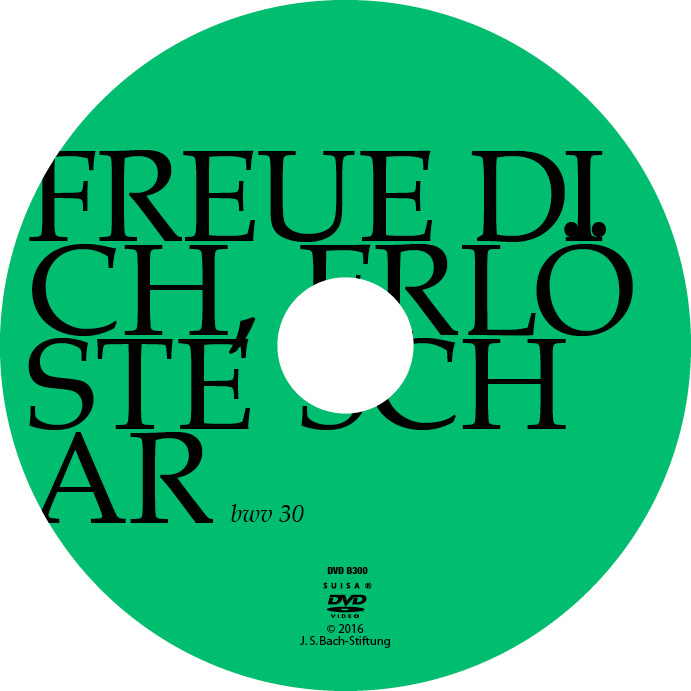 Although the sacred version eschews the trumpets and timpani of the original, the secular origins of the introductory chorus remain plain to hear. The movement has no prelude, opening instead with powerful acclamations from the choir. The music strongly resembles a dance suite, and its syncopated rhythms, rondo-style structure and transparent orchestration suggest that Bach, despite being in his fifties, was surprisingly willing to accommodate the increasing demand for a “natural” compositional style.
The Wiederau homage cantata, in accordance with the semi-staged structure of such serenades, features diverse allegorical characters, each of whom are assigned a recitative and an aria fitting to their role. In the sacred parody, too, each recitative and aria forms a unit, with the first recitative describing the shift from Mosaic law to the baptismal covenant, followed by an aria for bass, strings and continuo, whose text “All praise be to God” alludes to the biblical Canticle of Zacharias, the father of John the Baptist. This movement’s powerful minuet style lends its praise of God a priestly dignity in which the “Destiny” character of the original cantata has essentially been preserved.
The following pair of movements, too, can hardly deny their relationship to the character of “Joy” from the original cantata. The recitative, in fitting noble style, addresses John as the herald of “King” Jesu, while the ensuing alto aria, with its gallant melodic style and distinctive instrumentation of transverse flute and muted strings, seems startlingly modern for Bach. In the parody, the subservient delight of the Hennicke cantata is skilfully transformed into Jesus’ wooing of the “sorely tempted sinners” and “Adam’s children”. This is followed by a chorale, “Eine Stimme lässt sich hören”, inserted for the sacred parody only, which serves to break the cantata into the two-part form required to frame the sermon.
While the Wiederau cantata featured a secco-recitative, Bach favoured a more artistic form for the sacred parody, employing an accompagnato for bass and two oboes that gracefully illuminates the New Covenant lauded in the text. The aria, by contrast, embodies a drastic shift in affect from trust in earthly destiny to emphatic rejection of worldly pleasures, in emulation of Christ. In the next double movement, the wording and affect remain closer to the secular original. While the soprano recitative in both the secular and sacred versions emphasises the constancy of courtly order and observance of the baptismal vow respectively, the soprano aria reinterprets the words “haste, ye hours” as a symbol of longing desire – underscored by an insistent 9⁄ 8-metre and lyrical E minor key – to see the promised pastures of paradise.
The tenor recitative retains the welcoming gesture of the Wiederau banquet music, but uses it here to evoke enraptured anticipation of heaven, here the repetition of the introductory chorus rounds out a highly unusual parody composition that may well have caused many a Leipzig critic a moment’s pause.

The cantata “Freue Dich, erlöste Schar” (Rejoice, Redeemed Flock) and the circumstances of its composition provoke the question of whether that which held the world together at its innermost core at that time still does, and whether we would not need this in order for all that we do to have its meaning.