The cantata “I will the cross-staff gladly carry” was written for the 19th Sunday after Trinity in 1726. Thanks to recent scholarship, the long unknown librettist has been identified as Christoph Birkmann (1703–1771), a theologian from Nuremberg. Birkmann belonged to Bach’s circle of students during his studies in Leipzig and apparently wrote numerous libretti of striking eloquence for the Thomascantor. 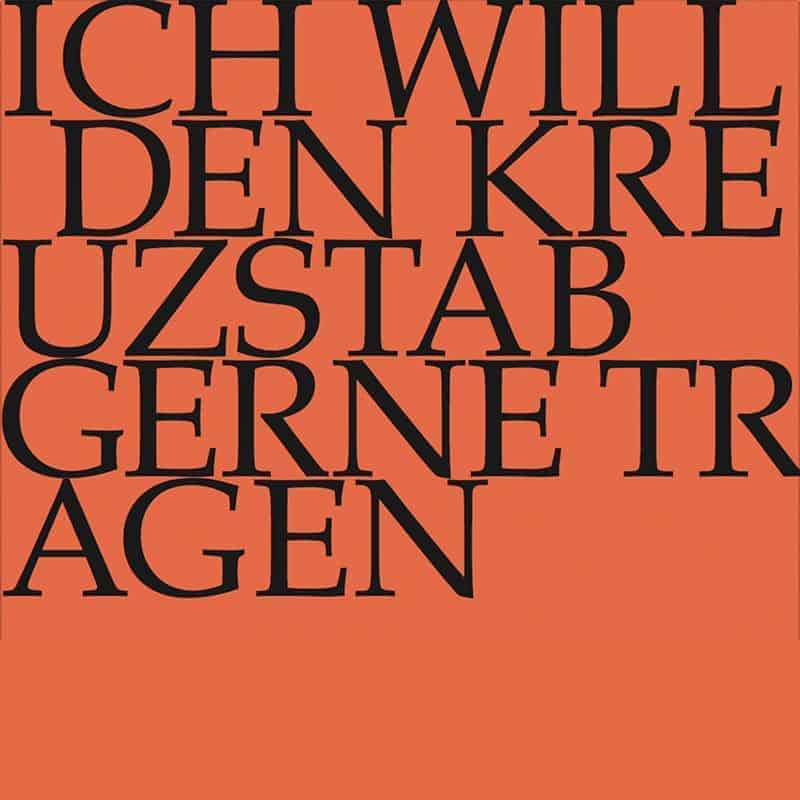 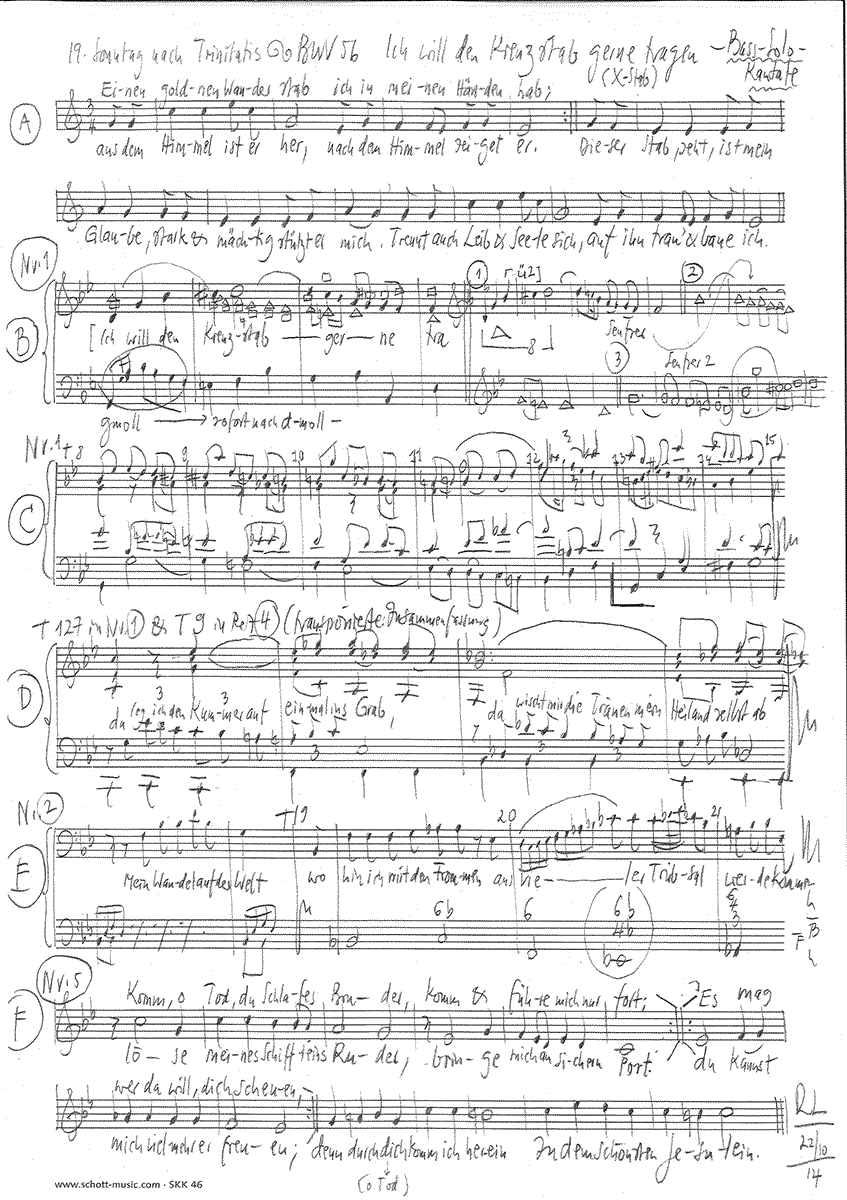 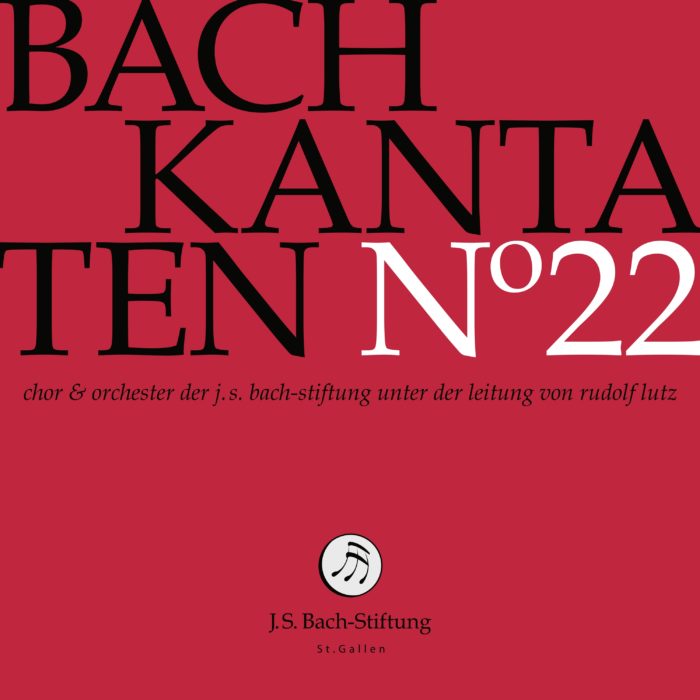 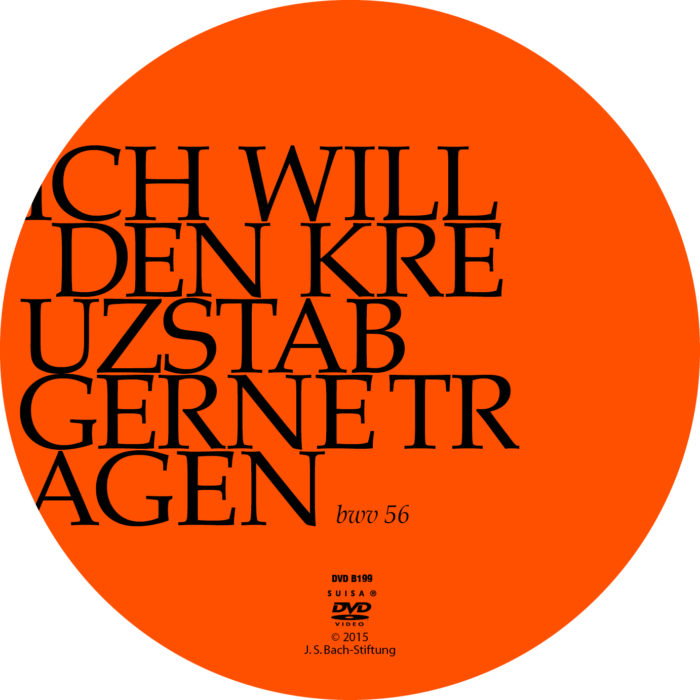 The introductory aria, with a head motive that is propelled by the energy of the continuo and culminates in descending sighs, makes an indelible impression. The orchestral accompaniment – at once lugubrious yet light – envelops and carries the vocalist, who, by repeating each section of text before advancing to the next passage, feels his way towards an acceptance of suffering and the acknowledgement of human mortality. Here, Bach’s interpretation of the words “the cross leadeth me”, in which he reverses the descending sighs of the opening passage to create an ascending line, is just as masterly as the sudden musical release that is linked to the source of all “troubles” from “God’s beloved hand”. This struggle between the hope of salvation and the experience of pain is eventually resolved in a triplet passage by the bass soloist who expresses hope that the saviour himself will soon wipe away the very tears that Bach so heartrendingly depicts in the closing phrase.
The recitative, a vivid account of a wave-tossed, yet protected “voyage at sea”, belongs to Bach’s most sensitive interpretations; with its cello part of rolling broken chords, the maritime imagery of the librettist is ideally rendered. This is particularly apparent in the conclusion, where Bach captures the end of the journey in a moment of musical deceleration that enables the soloist to confidently step ashore and enter his heavenly city. Nonetheless, a last reminder of the “deepest sadness” that has been overcome is evoked by a final running figure that concludes on a dissonant note.
This is followed in aria number three by a peaceful meditation on the release from all troubles that Bach scores as a trio for continuo, oboe, and bass vocalist. Set in ternary form, the underlying mood (particularly in the A section) is not one of triumphant rejoicing at the resurrection, but relieved gratitude and joyous anticipation; here, life is seen as a burdensome “yoke”, a depiction that lends insight into the world view of baroque times. In the robust middle section, death – in contrast to all human perception – is not portrayed as a loss of all strength and power, but is celebrated as an eagle-like ascension into a higher state of being.
The recitative “I stand here ready and prepared” is a rich accompagnato setting that adopts a celebratory tone to announce the determination to leave all earthly misery behind in favour of the heavenly inheritance. In this movement, the composer returns to the triplet figure of the introductory aria to create an arc of tension that is effective in its semantics and formal features, while also lending the short orchestral postlude the impression of a recapitulation of the bygone life.
“Come, O death, of sleep the brother” – with this verse from Johann Franck’s hymn “Du, o schönes Weltgebäude” (1653), the cantata closes with a chorale in C minor that, despite its simplicity, belongs to Bach’s most famous settings; indeed, beyond the world of music, its theme has been adapted in art and literature. Due to the low register of the setting and the glorious phrase modulations, the singing is imbued with a melancholy peace and strength that serves to heighten the brilliant, open sound of the closing chord: here the faithful are united with Jesus, a saviour who is both fatherly friend and babe in the manger.