(He who loves me will keep my commandments) for soprano, bass and four-part vocal ensemble, trumpet I+II, timpani, bassoon, strings and continuo 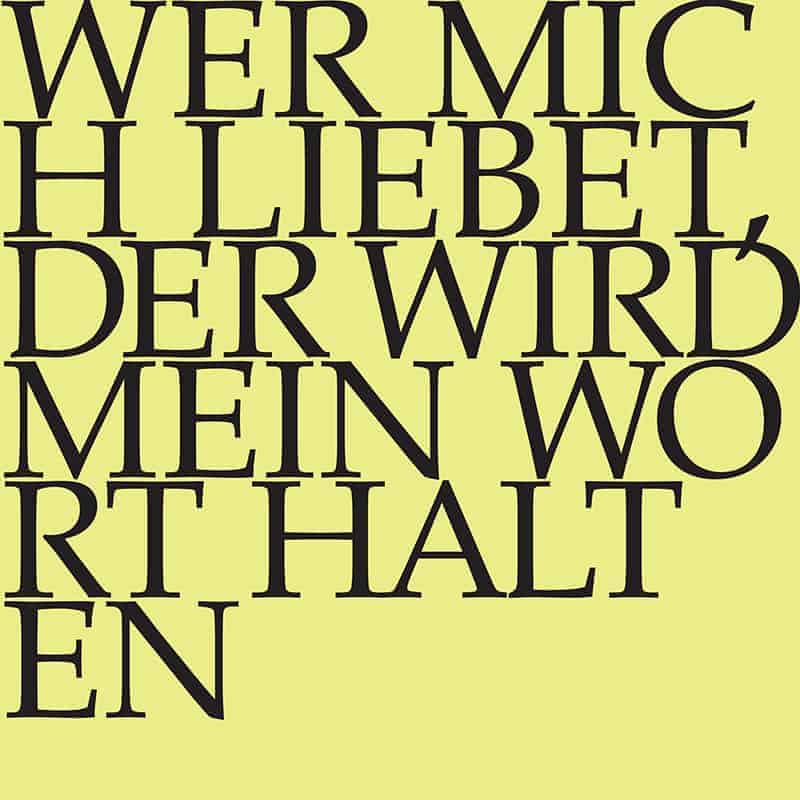 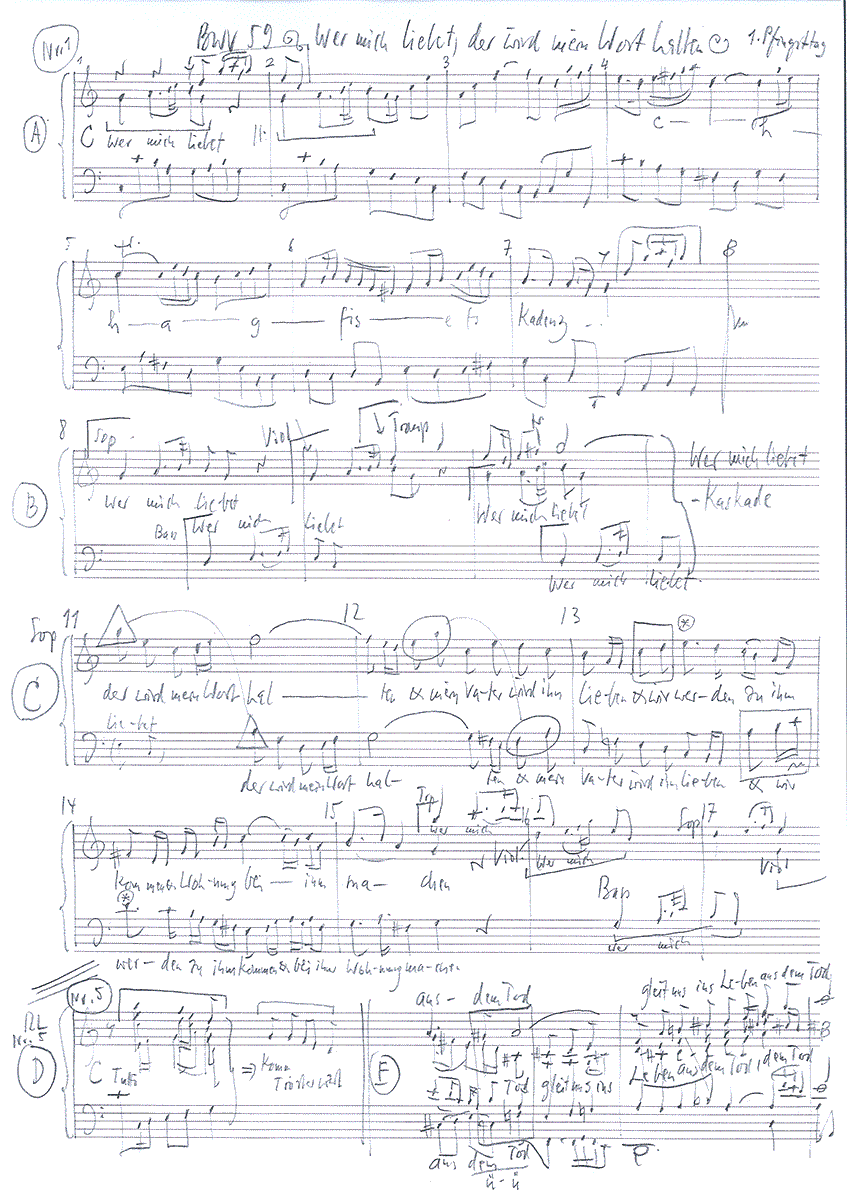 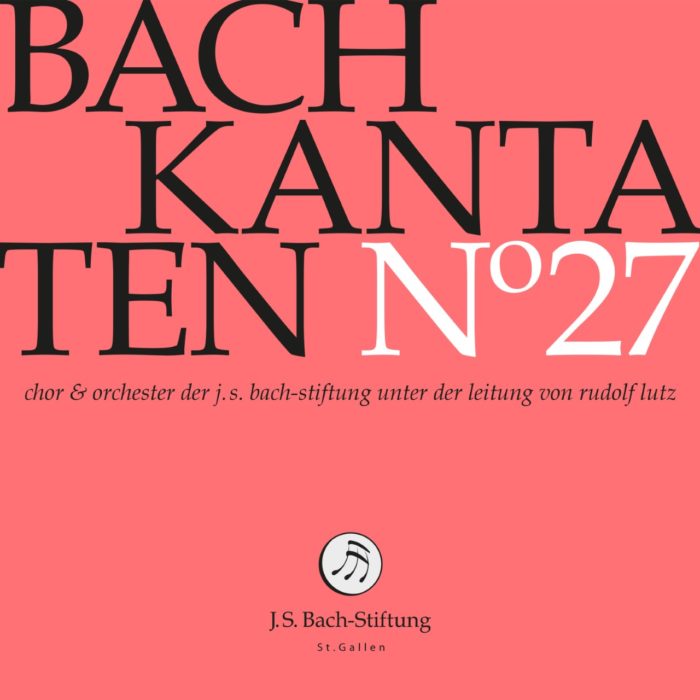 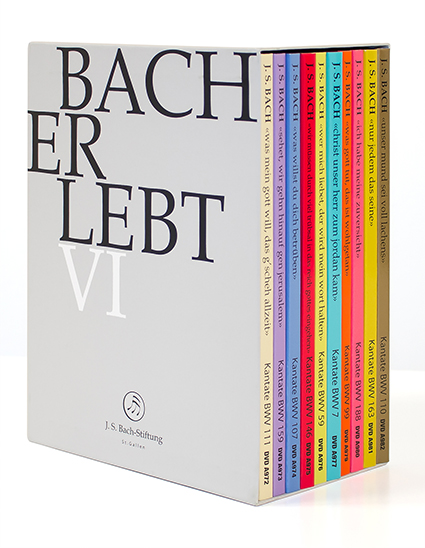 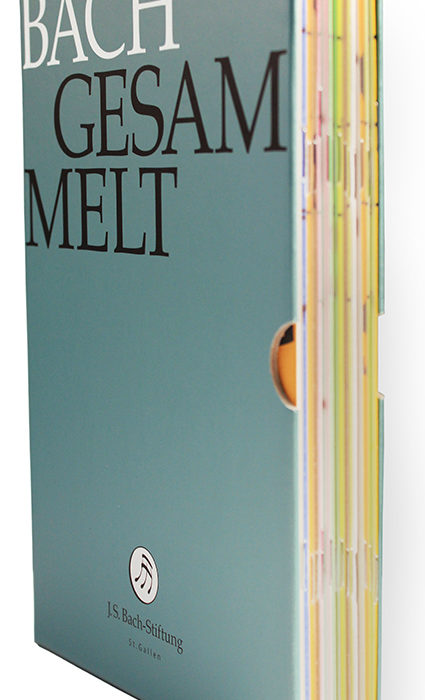 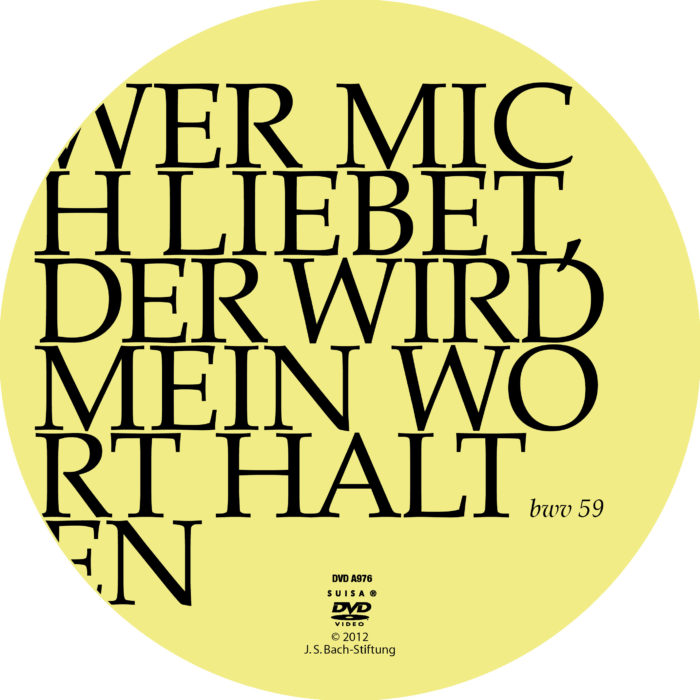 Bach composed BWV 59 to a libretto written by renowned text-reformer Erdmann Neumeister that was first printed in 1714 in Eisenach, then reprinted in 1716 in Leipzig; it appears that Bach set only four of the seven verses to music, and the extant version of the cantata ends with a bass aria with solo violin. This unusual ordering of movements places the chorale in the middle of the work, a situation that was quietly “corrected” in 19th-century publications of the work with the aim of establishing a conventionally well-formed conclusion. Because Bach substantially reworked and extended the introductory movement for reuse in BWV 74, and because the composition’s date (1723 and / or1724) as well as the occasion (probably a university church service) remain unverified, the cantata often suffers the ill repute attached to an incomplete and makeshift composition – a shadow that should be lifted from this charming work.

The work’s exquisite sound is established from the very outset through the soft and amiable Pentecostal tone of the introductory movement. The warm, flowing string setting is complemented by a cantabile pair of trumpets and discreet timpani; the resonant soprano and bass voices integrate seamlessly into the ensemble, forming a perfect whole. Opening with an expressive head motive, the various elements of the movement interweave in flowing phrases. With this simple yet artful concept, the music is  eminiscent of the charming tone of earlier sacred concerti, for instance those by Johann Schelle, one of Bach’s predecessors as Thomaskantor. Elements of Bach’s Weimar style are clearly audible in the composition, which has led to the – uncorroborated – conjecture that at least some of the movements stem from an earlier composition.

The soprano recitative “Oh, what are then these honours”, accompanied by a dark-timbred string setting, describes in celebratory tones the moment in which Jesus, through his presence, raises mankind from the dust. Here, Neumeister’s masterful formal diction and distinctive dramatic metaphors seem to have inspired Bach to a particularly vivid setting, which he concluded with an arioso passage giving an enraptured description of how beautiful it would be if we mortals shared in God’s wonderous love.

This is followed by a chorale movement that employs the Lutheran hymn “Come, Holy Spirit” to refer to the events of Pentecost. While the first violins support the soprano voice, the second violins and the viola – a favourite instrument of Bach’s – enjoy independent lines within the four-part structure.

Although the aria “The world with all its realms and kingdoms” opens with words on the transience of all earthly life, here, too, the music is replete with dulcet tones that call to mind the most beautiful movements from Bach’s accompanied violin sonatas. In this musical vision of love fulfilled, the bass soloist proffers a sonorous declaration: those who hold God in their hearts are not only blessed in spirit but may venture a glimpse into the majesty of heaven. Here, Bach’s simple musical phrases and concise, expressive figures embody both the clarity of the Pentecostal light and the childlike simplicity of the faithful soul.

It cannot be ruled out that the marking of “Corale segue” at the end of the original bass part is not a reference to a subsequent hymn setting, nor are the various theories on why Bach never set the remaining verses of Neumeister’s libretto entirely convincing. This ambiguous situation inspired Rudolf Lutz to compose a new setting to the chorale “Gott, Heilger Geist, du Tröster wert”, which followed in the original libretto. Based on a rich array of baroque idioms and techniques, the composition rounds out the cantata with the same pragmatic spirit that would have been adopted in Bach’s day, had a colleague prepared a re-performance of the work. The figural setting takes up the elegant lines of the trumpets and timpani from the opening movement and treats the chorale in a motetlike and distinctly cantabile style that not only harks back to the ethereal aria but also uses the full instrumentation to great effect. In this setting, the buoyant head-motive of “God, Holy Spirit” and the syncopated response from the winds form the source of inspiration for the whole movement.