(From the depths now do I call, Lord, to thee) for soprano, alto, tenor and bass, oboe, bassoon, violin, 2 violas, continuo

Cantata BWV 131 is based on the early liturgical Penitential Psalm 130, one of the texts of the Christian tradition most frequently set to music. Thanks to a hand-written note ascribed to a Mühlhausen preacher, “At the request of Dr. Georg Christ Eilmars set to music by Johann Sebastian Bach, Organist at Mühlhausen”, it is also one of the few surviving early compositions of Bach’s that can be reliably dated; a connection to the 1707 fire that devastated Mühlhausen, an imperial city of Thuringia, has always been assumed. 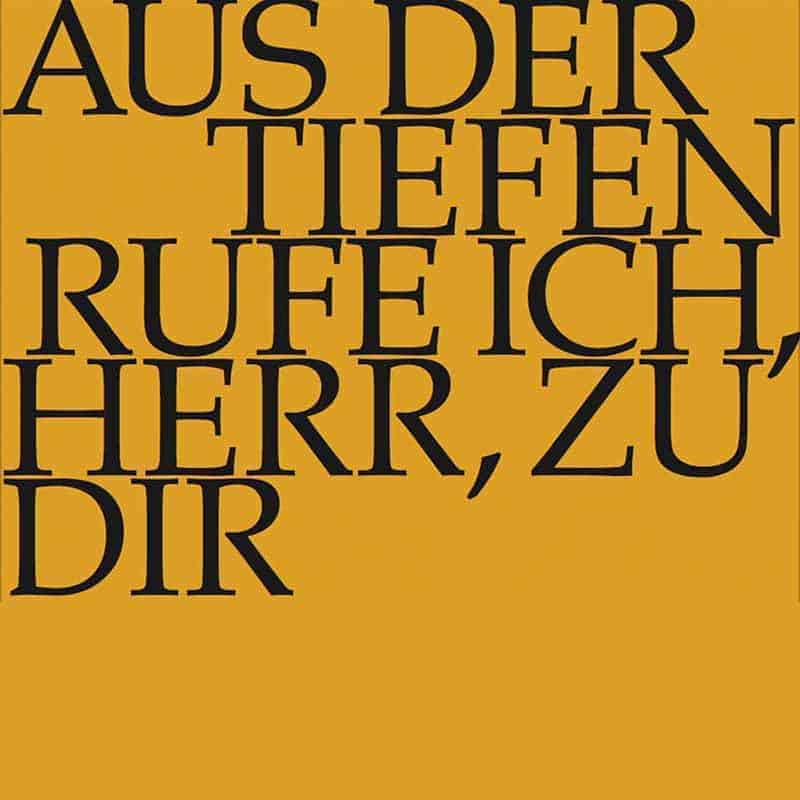 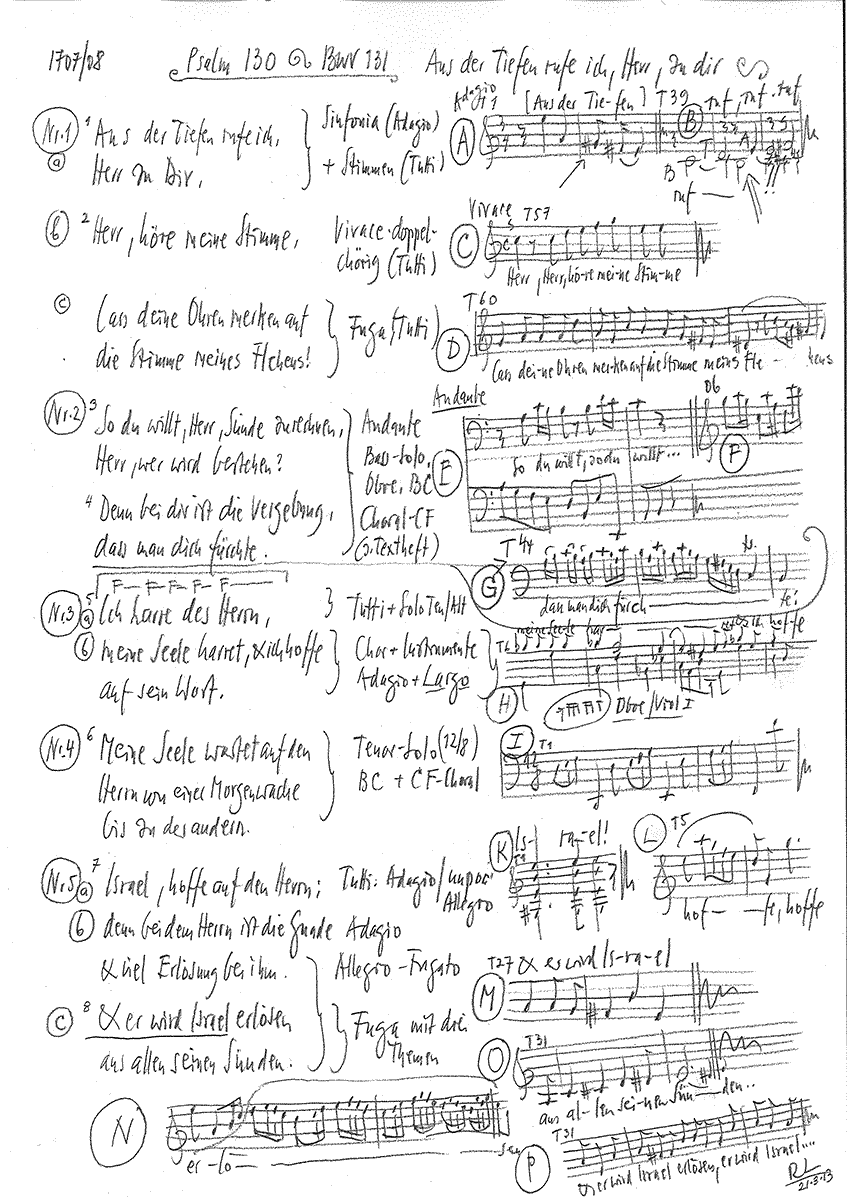 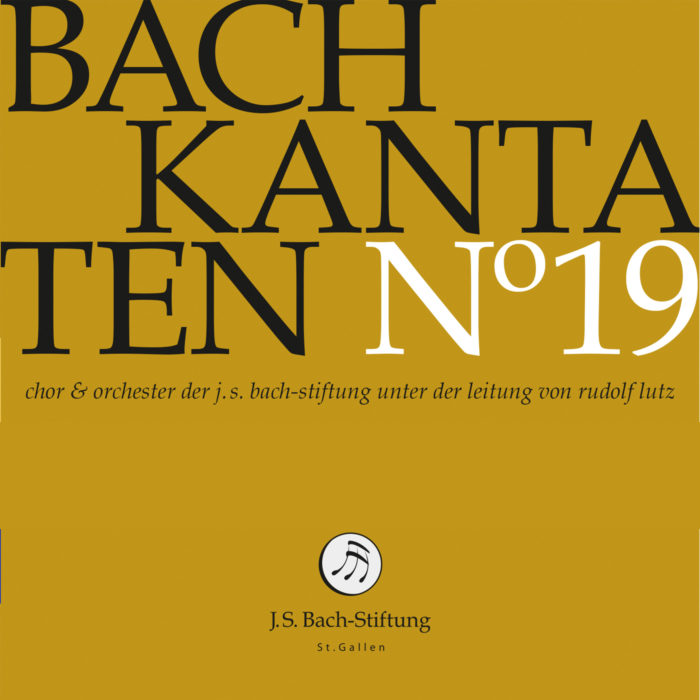 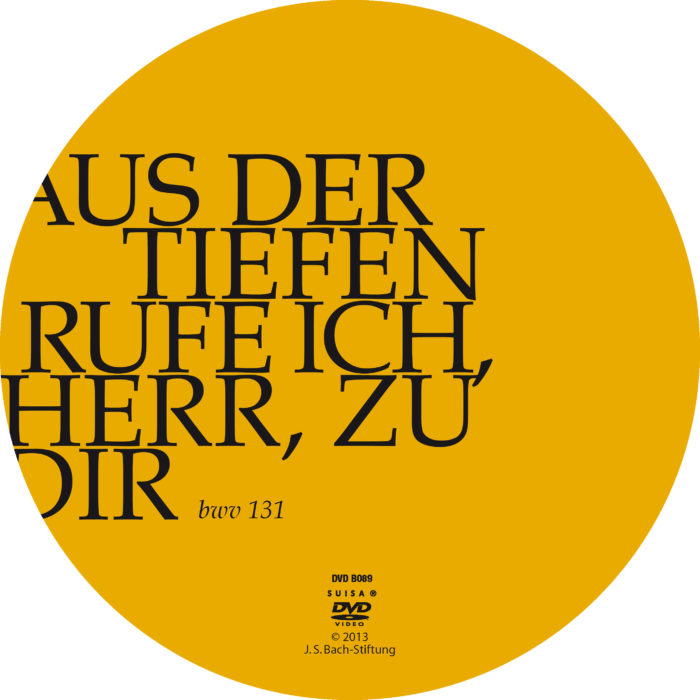 Set in an unusually shaded key of A major, Bach structures the Psalm text and chorale as a series of movements that flow freely into one another – a compositional form that, combined with the old-fashioned orchestration with split violas, lends the work more the form of a sacred 17th century concerto than a contemporary cantata in Italian style. It is only the fresh, inventive spirit of the piece that indicates the young age of the composer; indeed, Bach succeeded in channelling his knowledge of great works and his extensive experience as an organist into a masterful early work.
The opening tutti chorus of the cantata is preceded by a sombre “Sinfonia, Lente”, whose expressive echoing figures in the violin and oboe lines leave a lasting impression. In this compact setting, the vocal parts are inserted into fragmented phrases that express deep despair more as isolation and forsakenness than as a metaphorical fall from grace. At the line “let thine ears consider well the voice of my complaining”, the music assumes a hasty urgency, which, after the ponderous prelude, presents itself as a complementary fugue with an insistent declamation. Abrupt sighs and extensive ostinato figures with marked cadences hold the balance until the attacca transition to the andante section introduces a new idea. Accompanied by a quaver figure in the continuo, the bass opens with a solemn lamento, which is joined by the tender cantilena line of the oboe and the soprano presenting the repentance hymn “Have mercy on me in such grief”. Considering the severity of the sinners’ guilt, however, this setting cannot be viewed as a dialogue between mortals and their saviour. Rather, the trio setting enshrouds the chorale, thus underpinning the prayer of the bass with the archaic power of the hymn. Here, Bach succeeds in integrating the content of the psalm “For with thee there is forgiveness” into the overarching framework, while the sensitive application of the chorale showcases both his powers of innovation and the genius of his compositional skill.
In line with the work’s overall symmetric form, the middle movement “I wait for the Lord” is also set as a two-section tutti dictum. It opens with block-like defiance and passionate insertions, ere the transition from adagio to largo sets a dense imitative section in motion – a mixture of fugue and ciacona that once again seems to take inspiration from the organ. A lamenting motive of descending fourths gives way to a serpentine vocal line that interprets the “waiting” as dogged patience and a lifelong wait for salvation. It is Bach’s eschewal of simply doubling the voices that makes for the artistry of the movement. Although the malleable instrumental texture imitates the sighing gestures of the vocalists, it nevertheless rejuvenates the setting like the respite of a cool breeze in the desert heat of suffering.
While the fourth movement returns to the smaller orchestration of the second movement, its pastoral hymn introduces a new dynamic with its swaying rhythms. In this part, the smooth tenor cantilena transforms the dutiful vigil of the libretto into a mood of agitated expectation that receives support from a second spiritual entity in the form of a chorale.
Budding impatience and impending salvation enter a secretive alliance ere a shift takes place mid-movement to a plea for purification, which is represented by a chorale in the lower alto range. Despite the reference to David and Manasseh as the royal penitents of the Old Testament, Bach achieves an individuality and proximity here that spoke directly to his contemporaries and resonates still to this day. A comparison of this treatment of the chorale to the canonic use of the same melody in the introductory chorus to cantata BWV 48 reveals Bach’s ongoing fascination with the chorale as a second compositional layer, an artistic device that he continually varied and developed throughout his career.
The closing chorale is a complex structure, its music flowing without constriction and finding the right tempo to aptly reflect every thought. Opening with a warning cry of “Israel” – which here encompasses all children of God – the setting expresses an increasing urgency to “trust now in the Lord” whose “mercy” is interpreted in underlying harmonies as a paradisiacal state of unity with God. In this passage, the oboe line soars above the string accompaniment, evoking the dove of the New Covenant, as depicted on early paintings, ere the fullness of “redemption” rushes in to offer salvation. This strongly nuanced section emerges as the prelude to an extensive multi-themed fugue, whose virtuosic single-mindedness is presented by the master organist Bach in all his artistry. Indeed, it was later rearranged for solo organ (BWV 131a) in the key of G minor.
If, in 1707, Bach was first and foremost dedicated to his career as an organist, his greater ambition nevertheless already shines forth in this Psalm concerto – an ambition that he almost certainly did not gloss over as a simple career step when he submitted his resignation to the Mühlhausen Council. Indeed, Bach’s desire to realise a “regulated church music to the glory of God” is most probably linked with his ebullient creative drive that already erupted so forcefully in his highly contrasting Mühlhausen cantatas BWV 131 and 71.