The introductory chorus to cantata BWV 67 opens with a heroic horn figure and a triadic, fanfare-like theme that underscores the proximity of Quasimodogeniti Sunday to the Easter events of the preceding week. 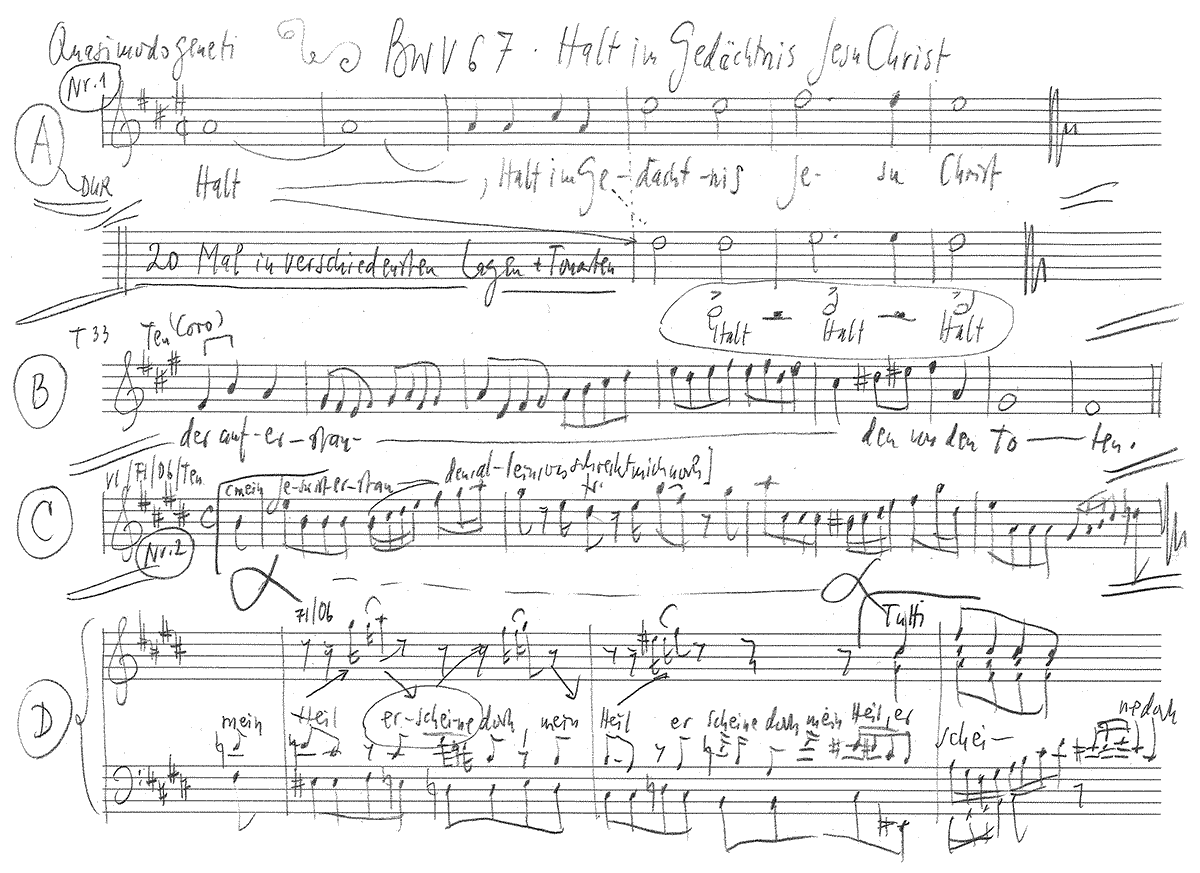 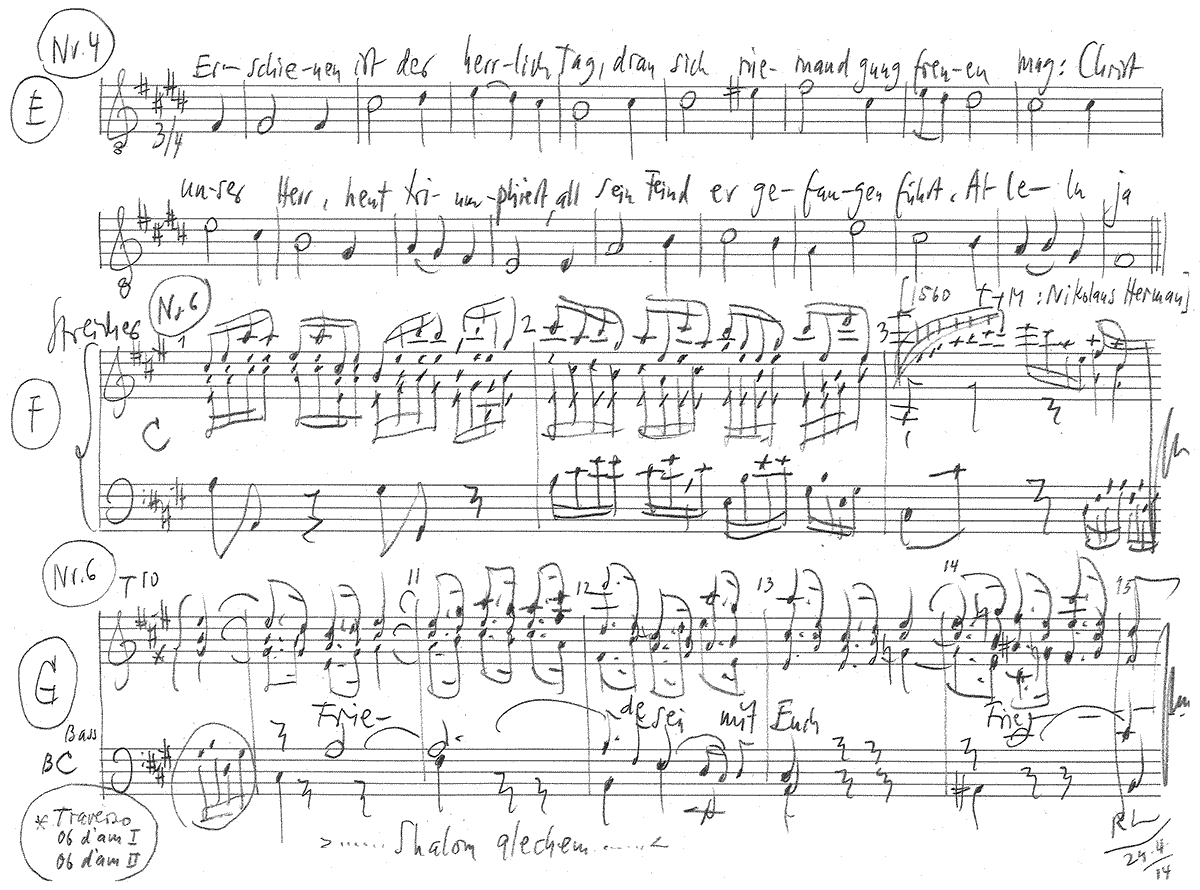 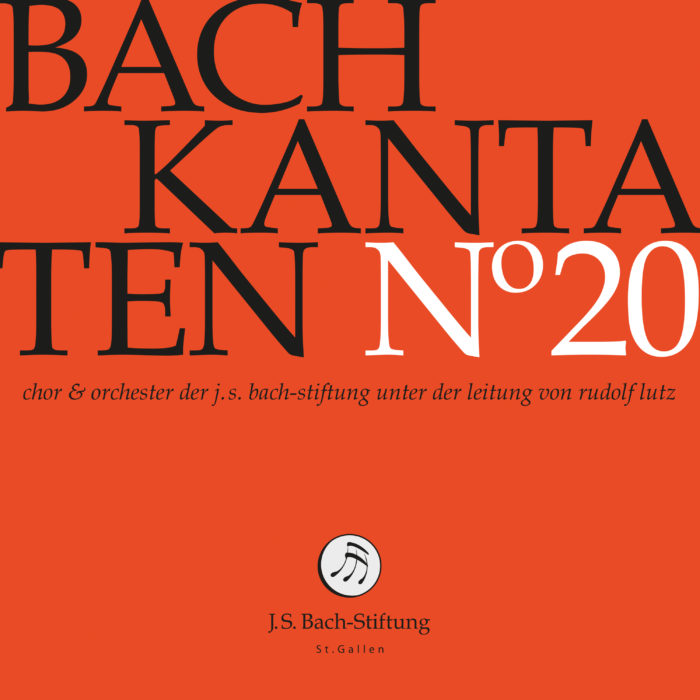 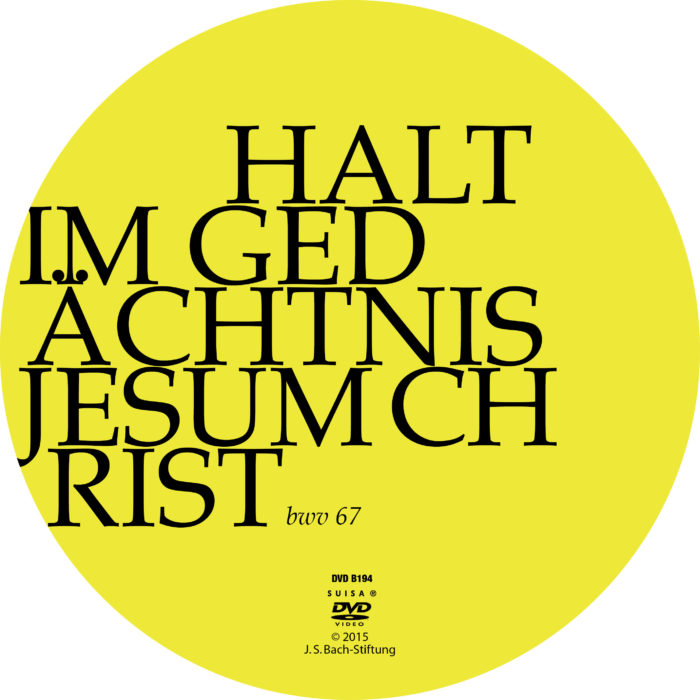 The introductory chorus to cantata BWV 67 opens with a heroic horn figure and a triadic, fanfare-like theme that underscores the proximity of Quasimodogeniti Sunday to the Easter events of the preceding week. In this movement, the disciples’ painful dichotomy of feelings – elation at the resurrection and devastation at the memory of the events preceding it – is impressively captured in the contrast between the gestural call of “hold” and the fugal, ascending triadic theme “in memory Jesus Christ who is arisen” that completes the phrase. The buoyant setting alternates choral concerto and fugal elements that ultimately merge to conclude the setting with a powerful choral dictum that reiterates the admonitory message of the text.
The following aria is set for tenor voice, a register holding the promise of victory. With its assertive gestures and brevity of form, the movement is reminiscent of Bach’s secular, occasional cantatas from his Cöthen years: the music’s speech-like instrumental motives and unpretentious decorative figures refrain from all theological-poetic fancy.
This is followed by a dramatic alto recitative that evokes the resurrection in powerful images of overcoming hell before announcing the common “song of praise… set upon our tongues”, a setting that lends powerful resonance to the attacca hymn verse “Appeared is now the glorious day”. By inserting these communal interludes in the cantata form, Bach presents the early Easter chorale as a common denominator that unites the performers and congregation; such moments reinforce how even Bach’s most elaborate compositions remain practical church music that have a direct connection to the liturgy.
After this unanimous pledge to the Easter message, the continued alto recitative presents a veritable “Confutatio” that acts as an internal test of externally promised faith: the enemy is powerful, and only active hope in the promise of the Lord remains amid earthly turmoil. This fighting spirit is then sustained in the ensuing aria, which numbers among Bach’s most interesting settings from his Leipzig era, and not merely on account of its form: here, the bass soloist interrupts the hectic broken chords of the string orchestra and, accompanied by the ethereal timbre of the woodwinds, transports the events of Emmaus into the present moment by proffering the sign of peace in an emphatically decelerated triple metre. The agitation of the disciples – torn between high morale, trepidation and gratitude – continually erupts in rapid bursts, yet each time Jesus intervenes to pacify his flock. By keeping the bass und upper vocal parts separate, Bach effectively presents the world of humankind and Christ as fundament as distinct spheres that, despite their separateness, can enter into an intimate dialogue in which the Saviour, with his tender gesture of peace, has the last word.
The hymn verse “Thou prince of peace, Lord Jesus Christ” then provides for a conclusion of laconic precision and simple persuasion: from the exultant rejoicing of Easter, quiet joy and humble hope have arisen.

“The Memory of the Divine”

“But woe! It walks in night, it dwells as if in the Orkus,
Without divinity our sex. To their own hustle and bustle
They are forged alone, and in the roaring workshop
Hear every one and much the savages work
With mighty arm, restless, yet always and always
Fruitless, like the Furies, remains the toil of the poor.”

In this night of eclipse of meaning, in which modern humanity lives according to Hölderlin, it is important to keep the “memory of the divine” alive: “Holy memory (…), to stay awake at night”, it says in “Bread and Wine”. Memory of the divine means, as Hölderlin explains in an essay, to preserve the awareness that there is “a more than mechanical connection” between people. One could also say: a more than functional-economic connection. The hubris of boundless exploitation of nature and infinite increase in performance in accelerated economic competition (“and much work the savages”!) should come to an end in favour of a society that would once again understand itself as a community, as a community in solidarity. For Hölderlin, the task of his Poe was to promote such communality by remembering the unifying power of religious world views. That is why he called his last poems before the outbreak of the illness “Gesänge”. They are songs that the poet, as it were as a pre-singer, now sings alone, but which are to become congregational songs so that everyone would feel the presence of Dionysus and Christ, those “gods of joy” that unite people in intoxicating rapture and love. That this happens where great art takes hold of an audience, where groups of people collectively reflect on something higher, “more than mechanical”, can be experienced again when listening to the cantata “Halt im Gedächtnis Jesum Christ”. Perhaps Hölderlin’s touchingly unrealistic hope that we would all one day become “singing” is therefore not entirely groundless after all. I will conclude by quoting the wonderful, enigmatic verses from Hölderlin’s song “Peace Celebration”, in my eyes the most beautiful poetic counterpart to that musical peacemaking in the restless soul that marks the end of our cantata:

“Much has from tomorrow,
Since we are a conversation and hear from each other
Experienced man; but soon we are song.”