(Jesus sleeps, what should my hope be?) for alto, tenor and bass, (soprano in closing chorale), recorder I+II, oboe d’amore I+II, strings and continuo.

The libretti set to music by Bach for the Sundays after Epiphany speak predominantly of abandonment, angst and resignation. The fundamental Christian belief in the salvation of the soul and the second coming of Christ is marked once every church year in observances which, by their nature, are hard to bear: the joyful days of the birth and epiphany of the Lord are followed all too soon by the harsh realisation of having to rely on our limited human strength – an awareness that is pervaded by a foreboding of the Passion and knowledge of our own mortality. In these texts, the Christian longing for closeness and sureness of heart is invoked by the metaphor of an absent or sleeping Christ. This corresponds to the painful insight that the path to heaven remains beset with adversity. 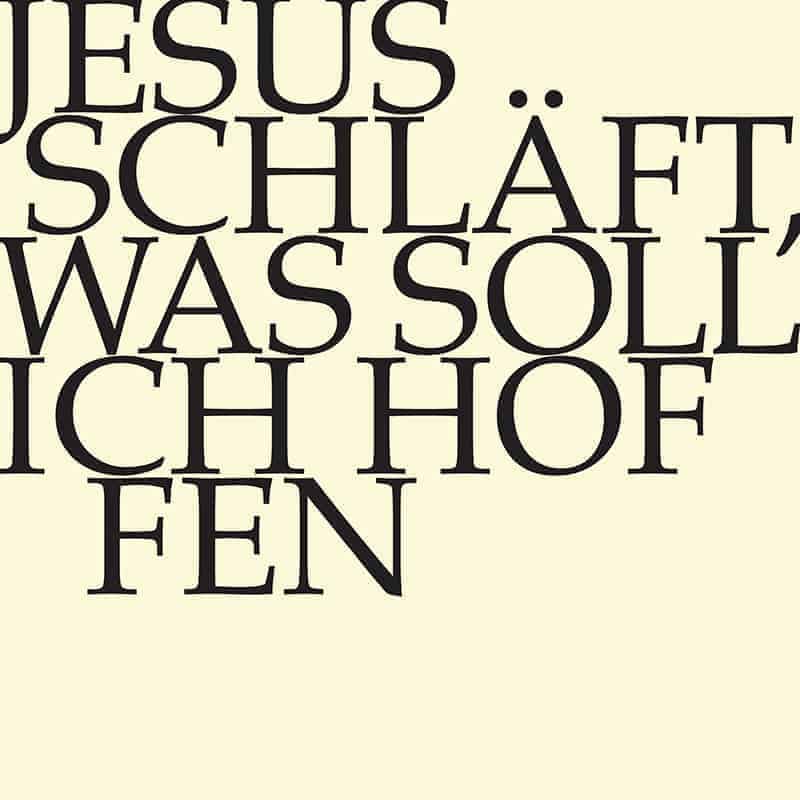 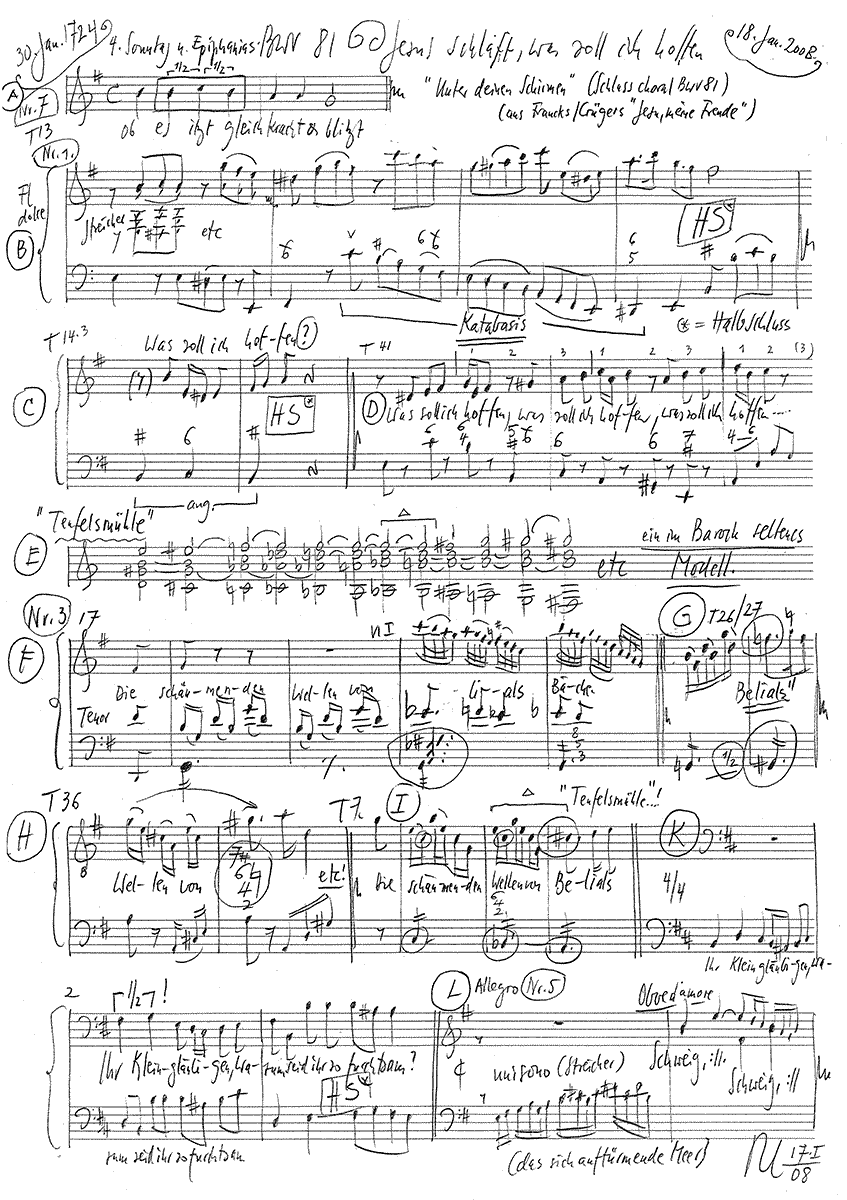 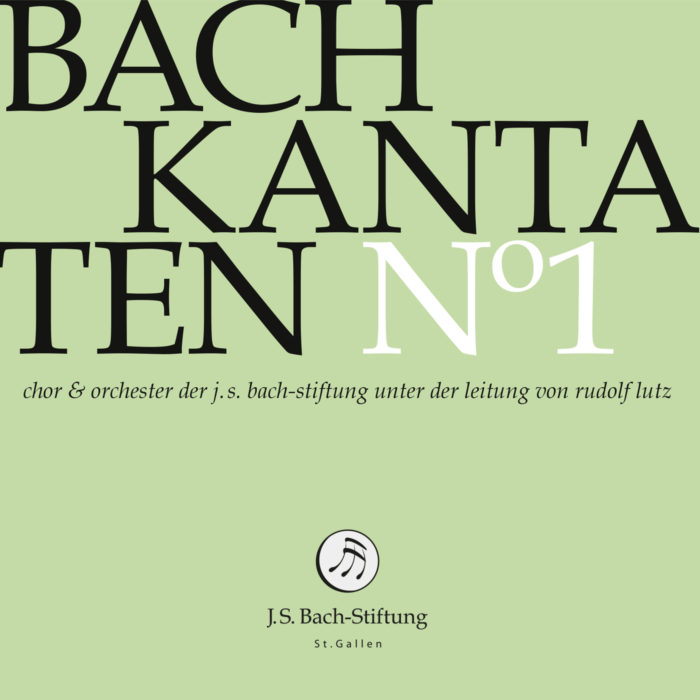 The cantata “Jesus sleeps, what should my hope be?”, first performed on 30 January 1724 as part of Bach’s first Leipzig cantata cycle, unmistakably translates this metaphor into music while the text relates Christ’s delayed intervention during a storm on the Sea of Galilee. In his compositional approach, Bach proved himself to be highly sensitive to the needs of the text. Aside from a quietness evoking sleep, the biblical passage quoted speaks clearly in the first person, lending insight into Bach’s decision to open the work not with a choral movement, but rather an alto aria – the vocal range and timbre that he often employed to personify spiritual inquietude. Although scored pastorally with recorders and strings, the work hardly presents the idyllic scene of tranquillity that so often graced Baroque operas and Christmas cantatas. Far removed from a sense of serenity and certainty, the forlorn music seems to be composed almost entirely of sighs. The frequent pauses of the upper voices bridged only by the throbbing continuo is suggestive of an uneasy Christian heart beating with trepidation in the face of the empty sound evoking the absent Christ. While another composer would have exploited the implications of a tempest at sea solely to paint a dramatic scene, Bach and his unknown poet chose an approach that speaks to the inner soul. Despite the “foam-crested billows” of the tenor aria, the reference to “Belial’s waters” implies that it is the infernal temptations of sin and mortal fear that blow the “winds of sadness” towards Christians. The following arioso, a gentle and steadying continuo ritornello, paves the way for a change in tone: in keeping with good Lutheran tradition, it is indeed those “of little faith” and their lack of trust in God’s word who cause their own despair. Consequently, it is a more fervent than loving Jesus who appears in the aria “Still, O thou tow’ring sea!” to silence the storm (oboes) and the waves (strings) to protect man – God’s chosen child. For this scene, Bach composed raging music invoking Christ’s power to calm the violent sea into long and sustained motionlessness. That Bach, just one and a half years later, set practically identical music to the text “hush, hush then, giddy intellect!” of cantata BWV 178, underpins the interpretation of the sea-storm metaphor in spiritual and moral terms. In the following recitative, the alto, who, like doubting Thomas, has been converted by receiving Christ’s help, brings the thematic scheme of the cantata full circle. A better closing choral for this work than the second verse “Under thy protection, am I midst the tempests, of all foes set free” from Johann Franck’s renowned hymn “Jesu, meine Freude” could hardly have been found.

If all people were guided by these cardinal virtues, elites would be unnecessary and a grassroots democratic order in the sense of early Christianity would be possible. And the challenge of Matthew’s Gospel “O ye of little faith, why are ye so fearful?” would become obsolete. However, we are far from this ideal, so elites are needed to lead the human community. But they can only serve the community as good elites if they consciously take on responsibility. Originally, responsibility meant: to stand up for something, to represent something and to justify oneself. Today one could say: I stand by my ideas and my behaviour, I put myself forward because I can stand behind them and I am prepared to openly legitimise any behaviour. I want to be responsible to my fellow human beings with my thoughts and actions, but I don’t only want to understand it in such a way that it goes down well with the public and the media. I am also responsible to my own conscience and – as a Christian – to God, who guides me. Responsible thinking and acting is based on conscientious action. But the question remains open as to how far my responsibility as a member of the elite extends. There is no universally valid, pragmatic answer. However, in his book “Responsibility Sovereignty”, published in 1994, Father Albert Ziegler tries to clarify the problem with a small example: “I throw a stone into the water of a lake. The throwing of the stone causes a circle in the water, which in turn causes further circles, which become weaker and weaker and finally (almost) disappear in the distance. Up to which circle do I have to answer for my stone throwing?” Some think that I am responsible for all circles. But in doing so they take on a responsibility that they cannot bear. No one can bear such a comprehensive responsibility; one would become afraid and unable to act. The others say that they are not responsible for a single circle. This would be irresponsible. Therefore, a middle course between the maximum demand and irresponsibility must always be sought. But how does the good elite find this middle way in everyday thinking, decision-making and action?
The prerequisite for this is the examination of conscience: all people have a conscience that is better or worse depending on the effectiveness of their religious or general value education with regard to desired goals. This education is all the more effective the earlier children come to terms with moral values and the deeper their religious and ethical understanding is. A good elite is therefore expected to be able to independently reflect on emerging ethical problems and to discuss its own decisions of conscience, especially with people affected by them, in order to become aware of the responsibility of its decisions and measures and ultimately to be able to legitimise them. This requires personality traits that are indispensable for the good elite:

These personality traits thus characterise the good elite. Scientifically, they are speculative. But they are at least suitable for reflection on one’s own thinking and actions.
This brings us full circle: “Jesus is asleep, what can I hope for?” indicates helplessness. “You of little faith, why are you so fearful?” is the challenge to believe in something, to take action and to stand up for one’s ideas and goals. It would be nice if every single person would follow this call. Unfortunately, today this call is becoming increasingly ineffective: people are torn in their values – not infrequently as a result of manipulation and opportunism – they enjoy the moment instead of taking long-term effective action based on reflected value attitudes right into the personal spheres of life, and they evade when things become unpleasant. Therefore, the longer it takes, the more we need a good elite – and all further social decisions in the direction of egalitarianism remain a socio-political fad that ultimately benefits no one. But do we have the strength and courage to stand like a rock in the surf?