(The man who leaves to god all power) for soprano, alto, tenor and bass, vocal ensemble, oboe I+II, strings and continuo

Composed for the Fifth Sunday after Trinity in 1724, the cantata “Wer nur den lieben Gott läßt walten” (The man who leaves to God all power) at first appears to be a typical representative of Bach’s chorale cantata cycle, employing as it does a traditional church hymn as the musical and textual basis of the work. A second glance, however, reveals that the treatment of the chorale is atypically complex, with chorale melody and text skilfully – and inventively – interwoven throughout the entire cantata. Entirely foregoing da-capo arias, the work has characteristics of a chorale partita (despite the sections of freely versified text), and its concisely structured movements make for a particularly dense and highly convincing composition. 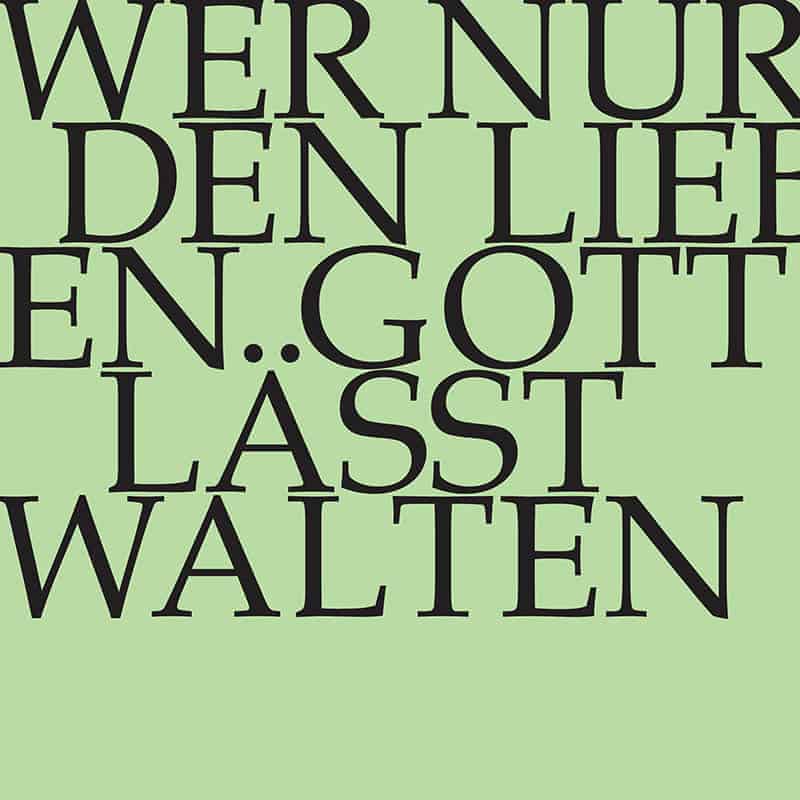 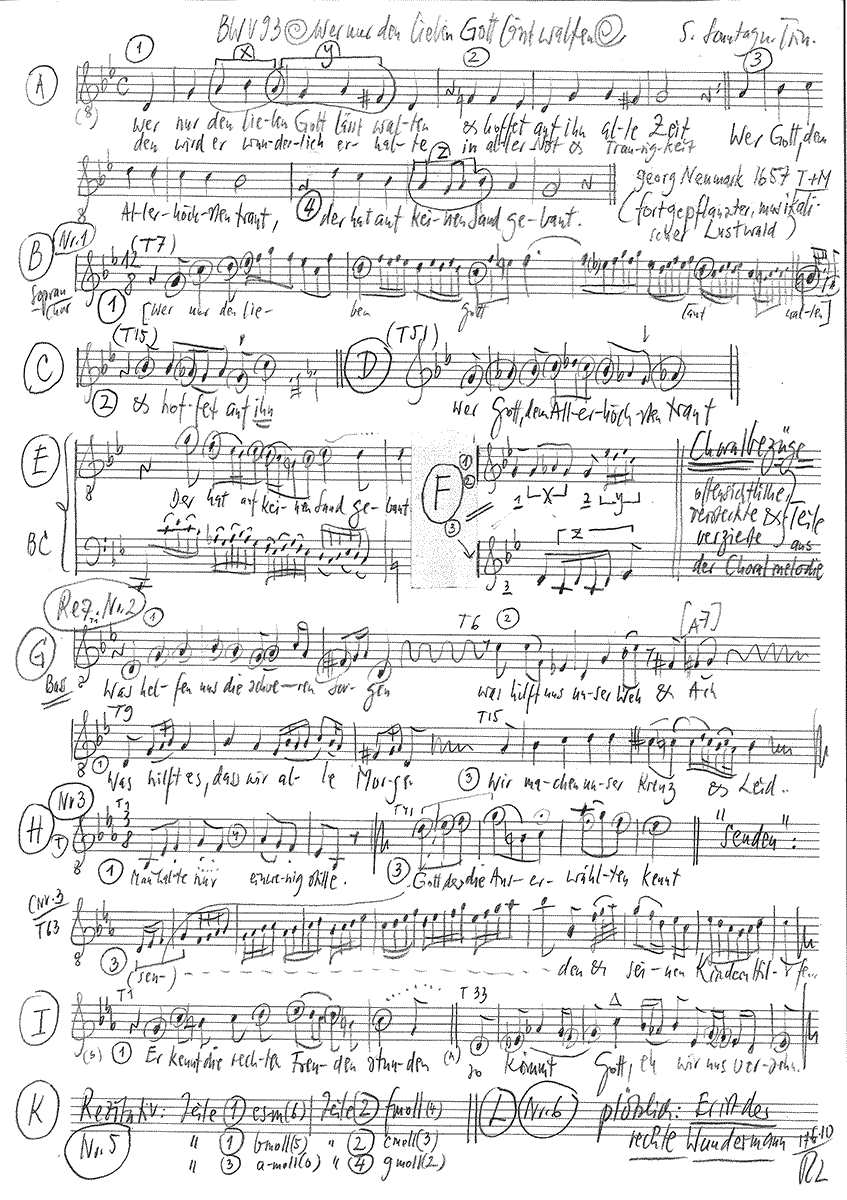 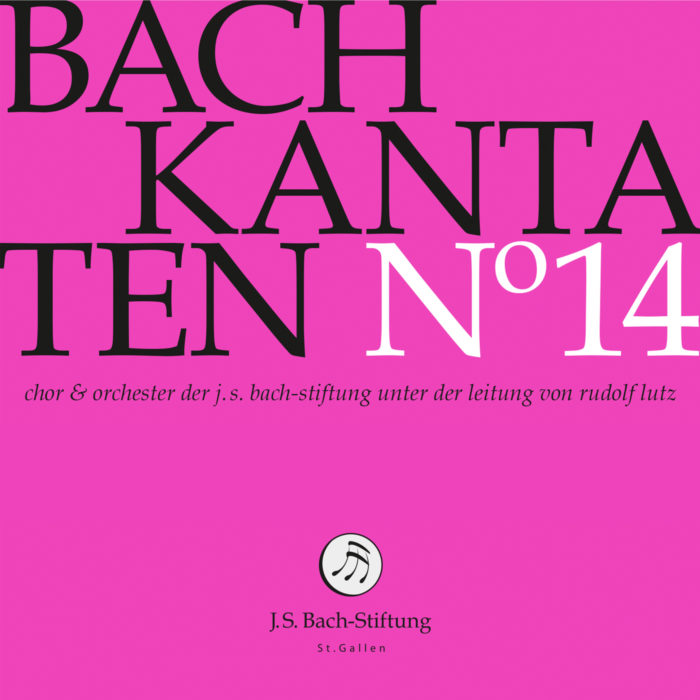 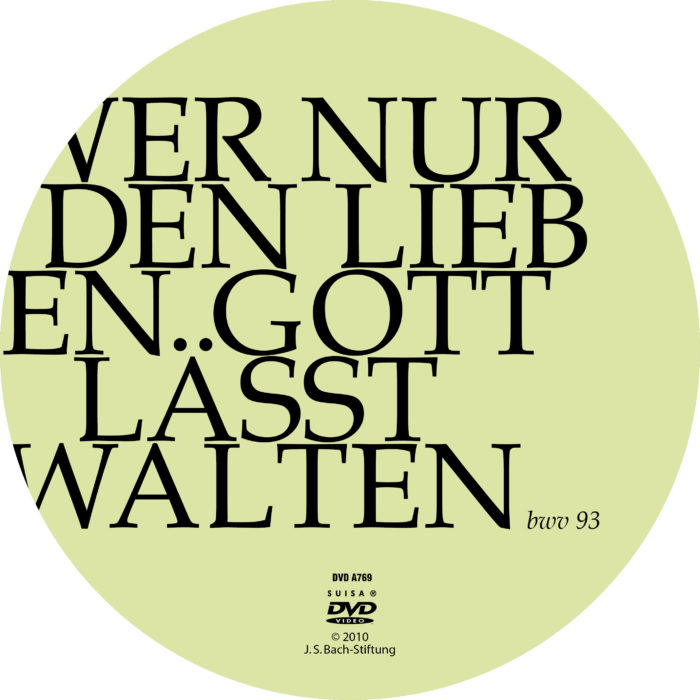 In the introductory chorus, the forlorn C minor tonality contrasts starkly with the gently rocking 12/8-time siciliano; an expressive interpretation of God’s support and protection through “every cross and sad distress”. Equally notable are the intricate vorimitations, modified line for line, that precede the full choir presentation of each chorale phrase with the melody in the soprano voice. Indeed, it appears Bach wished to give this well-known hymn of comfort a particularly artful arrangement.
The bass recitative effectively conveys the contrast between hymn text and free verse, and thus the sermon-like procedure of textual interpretation. The ensuing aria “If we be but a little quiet, Whene’er the cross’s hour draws nigh”, by contrast, is distinguished by a particular lightness of foot, despite its weighty subject matter. The elegant minuet style imbues the movement with an infectious energy that seems inspired by an image of childlike trust. Even the regular pauses in the string parts do not halt the momentum, but instead provide a musical notion of “psst!” and evoke the energising twists and turns encountered over the course of a life well lived.
The following duet creatively turns traditional chorale treatment on its head: although the soprano and alto deliver the chorale text without amendment, the chorale melody is nowhere to be heard in their short exchanges. Instead, the melody is presented instrumentally as a “chorale without words”, woven into the setting line for line by unison strings. Considering the mastery of this beautiful arrangement, it is no wonder that Bach later reworked it for organ, giving it pride of place in the six “Schübler Chorales”.
This sense of serenity is again succeeded by a chorale recitative of high emotional drama in which Bach brings the alternation between hymn text and interpretive passages, as well as between chorale verse and Sunday gospel, to an emphatic climax. Although “fire and thunder” may crack and the inner “trial by fire” may lead us to despair of God’s mercy, here, the interplay of free continuo passages, unexpected shifts in tempo and harmony, and skilful vocal accents, gives rise to a spirited sermon that no doubt left even the most dynamic preachers of Bach’s time with a hard act to follow.
This mood of spiritual turmoil gives way to an aria for soprano, continuo and oboe, whose energetic trio setting again employs texts from the chorale. Despite its rapid movement, the music cannot entirely cast off its dark fundament; the unfathomable will of God hangs like a shadow of resignation over the song of trust, one textually akin to a hymn of praise to the Madonna.
With a return to the forlorn key of C minor, the resolute closing chorale leads the chorale variations of this cantata to a predictable, yet powerful conclusion. The tenor embellishments and sudden shift to a bright, major tonality in the closing bar provides for a particularly pleasing effect.

“Roots of Hope and Serenity”

Thirty years of war. Thirty years! Who only lets the good Lord prevail? Half of Central Europe destroyed, pillaging, devastation, rape, half the population wiped out. Who only lets the good Lord prevail? The poet, Georg Neumark, does not ask this question in this song around 1657. Paul Gerhardt (1607-1676) is another who wrote poetry at this time. He too creates songs of beauty, joy, trust in God – hardly a trace of the horror of the times. Johann Scheffler, the “Silesian Angel” (Angelus Silesius) – whom we will come to later – is contemporary (1624-1677).

One last remark: what will remain of our culture, of our religion or religions? In five thousand years, in ten thousand years perhaps? We look back on three hundred years of music history when we experience Bach and make music. We look back on two thousand years of Christian history when we experience this passage, this looking through the cross towards Christian serenity. We look back on two and a half thousand years of Buddhist history when we learn to systematically practise serenity, when we train our senses and our consciousness to open up to what Bach sings and plays about. Two thousand years, three thousand years – that seems a lot to us, but it is only a short episode in the history of humanity, which is decades thousands, centuries thousands old. If we look back into the depths of this dimension of time, we know almost nothing. If we look five thousand years, ten thousand years ahead, we know nothing either. But one thing is certain: our cultures, our religions will have changed dramatically by then, provided humanity has not wiped itself out by then. We are already experiencing the rapid change within the few decades of our own lifetimes. It seems to me – but this is my own personal judgement which cannot be generalised – that one thing remains of this Christian experience, of Christian serenity: the music in which the contrasting experience of pain and joy resounds as nowhere else in human expression. It is what we hinted at earlier, what is present in the music of Bach, of Mozart and of many others, but perhaps especially in these two: that joy and sorrow, being redeemed and pain sound together at the same time. In the cantata, this can be heard and experienced crystal clear in the various figures, in the first but also in the second movement. Joy and sorrow are not two successive gestures of the human heart, but they are mutually dependent, they play around each other. And when one has understood this, when one has experienced this, then a certainty of trust is possible.
One of the great conductors of the 20th century, Sergiu celibidache, said:
“Bach is what remains when one has overcome suffering.”