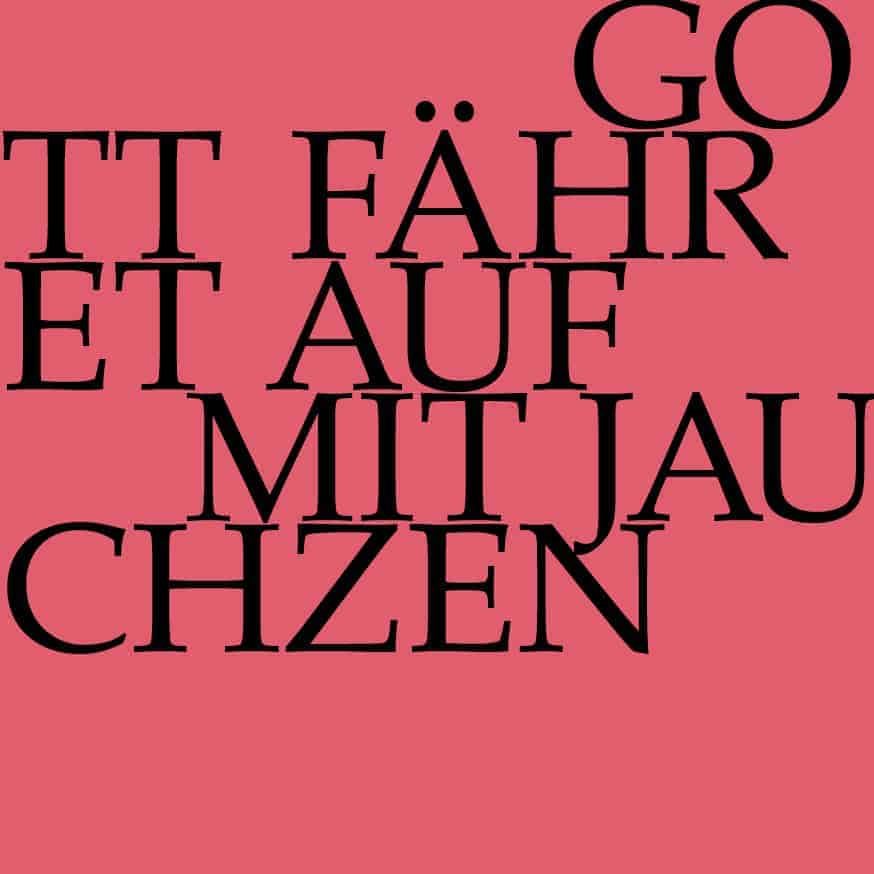 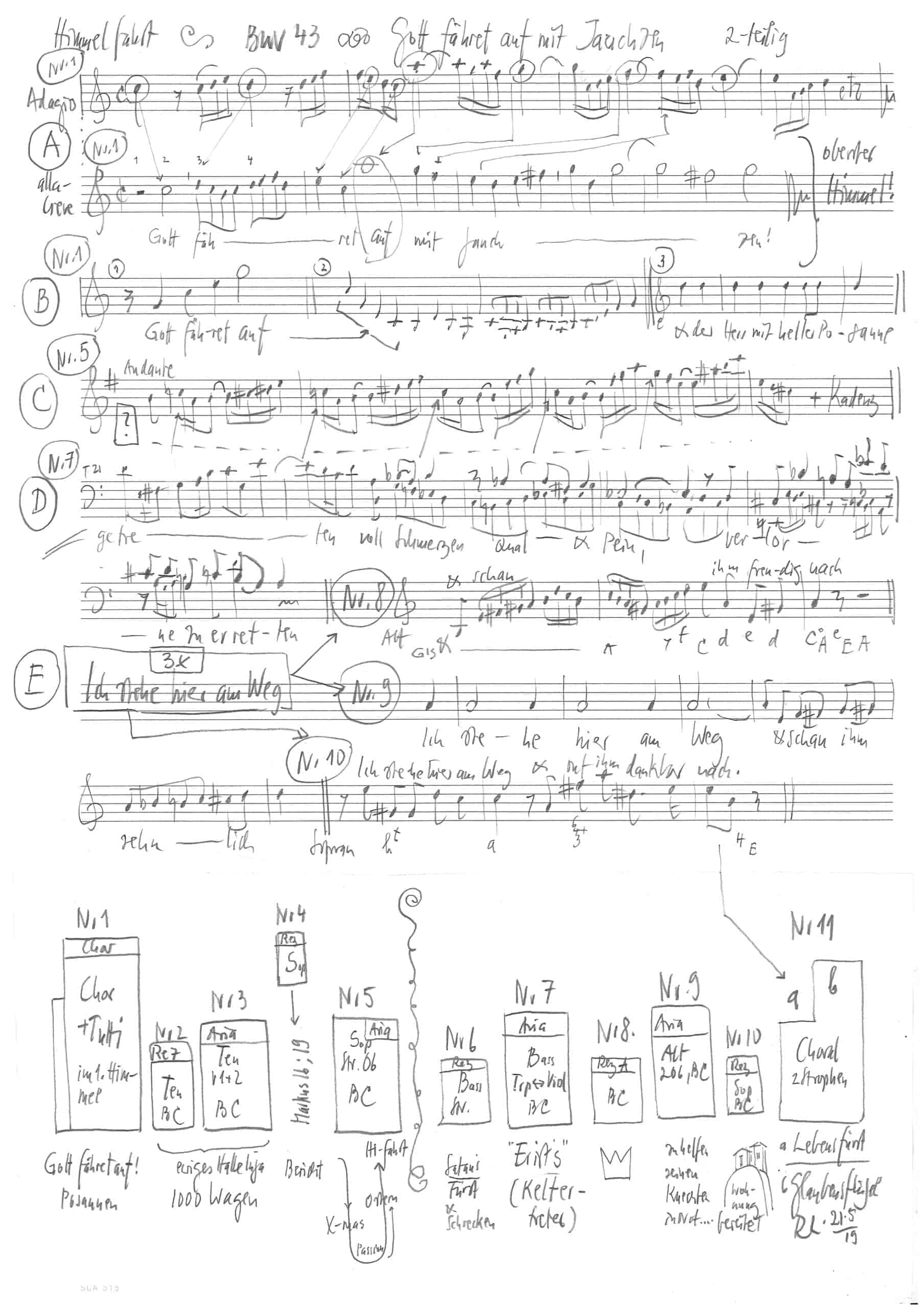 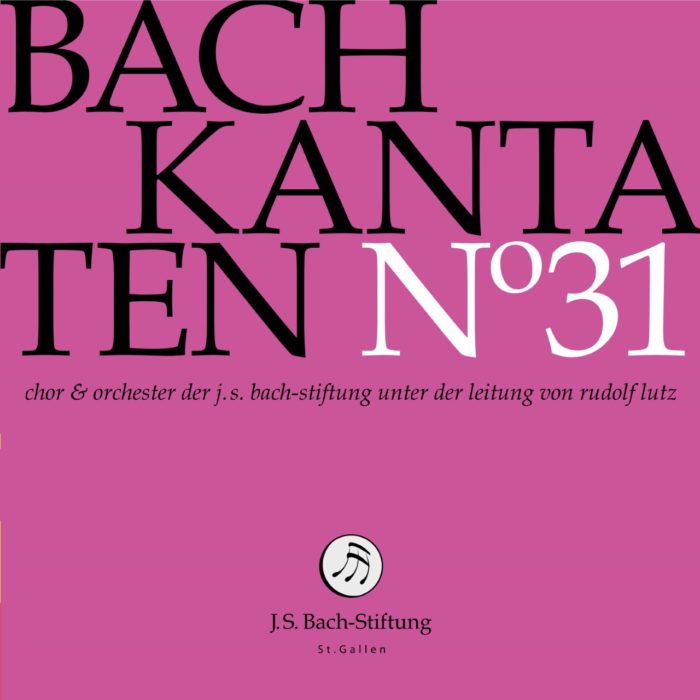 First performed for Ascension Day in 1726, cantata BWV 43 is associated with a Thuringian-Saxon network of relationships that links Bach’s cantatas from that year to texts from Meiningen as well as to compositions by his cousin Johann Ludwig Bach, who was a resident of that city. Indeed, both composers employed verses that had been printed in numerous editions after 1704 and that were most likely penned by Prince Ernst Ludwig of Meiningen; movements five to ten of this cantata are based on such works. In the first half of 1726, Johann Sebastian furthermore alternated between performing his own works and sacred compositions by Johann Ludwig. These cantatas typically employ two Bible dictums, one each from the Old and New Testament.

The two-part introductory chorus opens with an adagio introduction that, in its stylistic similarity to the overture from the C Major Suite BWV 1066, captures the moment of stillness and calm preceding Christ’s ascension. At the transition to the brisk allabreve section, the first trumpet opens with an impressive fanfare over the resounding string passages, after which the tutti instrumentalists and choir enter with block-like calls and melismatic coloraturas illustrating the word “Jauchzen” (jubilation). This compact musicmaking flows into a powerful chorus on the words “Lobsinget Gott!” (Sing praise to God!) ere the freely polyphonic orchestral gala draws to a thrilling, clamorous finish.

The tenor recitative features what is termed an “aufmerksame Seele” (attentive soul), who, in awestruck contemplation of the heavenly host accompanying Christ’s ascension, rhapsodises with rhetorical questions in praise of God. The ensuing aria, in swift 3⁄ 8 metre, opens with a fleet-footed semiquaver figure for two unison violins over a light, swinging continuo accompaniment that sets the scene for the entry of the soloist, whose compact melody is based on the key notes of the cascading string figure. In this efficient movement, the music’s dramatic focus is less the crowd of “thousands on thousands” (from Psalm 68) who accompany the victorious king, than the earth-shattering pace of the Ascension.

The following gospel passage from Mark 16:19 is presented in a short and unpretentious soprano recitative, ere the aria, a surprisingly elegiac E minor setting accompanied by oboes and strings, gives expression to the parting sorrow of those left behind. Considering the bell-like clarity of the boys’ voices in Bach’s St Thomas choir, this no doubt made for a highly poignant moment that paved the way for the sermon.

The second part of the cantata opens with a contemplation of the heroic triumph of Christ, who is here addressed as the “hero of heroes” in a resonant recitative conceived for a powerful bass voice and agile string accompaniment. In the following bass aria, the trumpet responds with a highly exposed obbligato that is at once heroic and cantabile in style. (It is perhaps no coincidence that this exceedingly difficult part was transferred to the violin for a later performance; we have included the charming alternative arrangement as a bonus track on this CD, together with its preceding recitative.) In this industrious aria-trio setting, the tone is characterised by the wearisome “treading of the winepress” – its combined notion of crucifixion, resurrection and ascension audibly demands superhuman strength. The da capo of the aria, by contrast, is limited to the opening ritornello; it is possible that Felix Mendelssohn Bartholdy, who at the Cologne musical festival of 1838 performed BWV 43 as the centrepiece of an ascensionpasticcio of Bach’s music, was inspired to make similar abridgements in his arrangement of the master’s St Matthew Passion.

Entrusted to the alto, the final recitative and aria pairing is introspective in style. For its part, the recitative reveals the auspicious message that because Christ as the first of the resurrected faithful wears the crown of life, the pious still confined to an earthly existence can look up to him in confidence. This atmosphere of blissful anticipation is embodied in the aria by a pair of oboes, whose gentle melodic figures help incorporate in a consoling whole both the edgy bass part and a text that, at least in part, calls for wrathful destruction of the enemy and dwells on the woes of earthly privation. After the closing soprano recitative, which evokes the promise of a final dwelling place with God and thus transforms all sorrowful parting into liberated gratitude, the two-verse closing chorus unifies the message of the Feast of the Ascension with archaic simplicity. While it is uncertain whether Bach intended the use of brass instruments in this movement, their inclusion in our recording transforms the closing section into a climactic celebration of a liturgical theatre designed for a faithful congregation.