(In peace and joy do I depart) for alto, tenor and bass, vocal ensemble, horn, flute, oboe d’amore, strings and continuo.

Throughout his chorale cantata project for the 1724/25 church year, Bach was not only required to compose compositions for the regular Sunday services, but also a hymn-based cantata for the Marian Feasts and other special occasions. One such event was the Feast of the Purification of the Virgin on 2 February, at the end of the Epiphany season, for which Bach composed cantata BWV 125. The celebratory character of the feast is drawn from the gospel story of Simeon the Elder, who received the prophesy that he would not see blessed death until he embraced the new-born saviour. Indeed, the associated Canticle of Simeon (“Now, Lord, you let your servant go in peace”) was a frequently selected text for funeral music, as it presents a distinctive relationship between acceptance of death and the assurance of salvation. And the canticle not only forms the basis of Luther’s paraphrase of the hymn “In peace and joy do I depart” but also the freely versified movements of the cantata; the libretto thus represents a new adaptation of two key Lutheran texts. 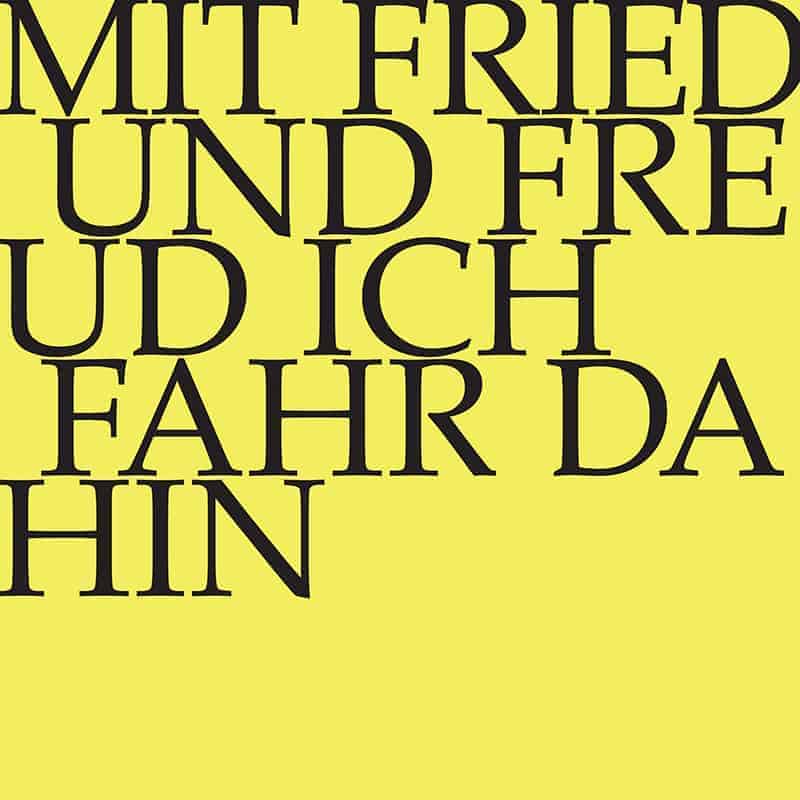 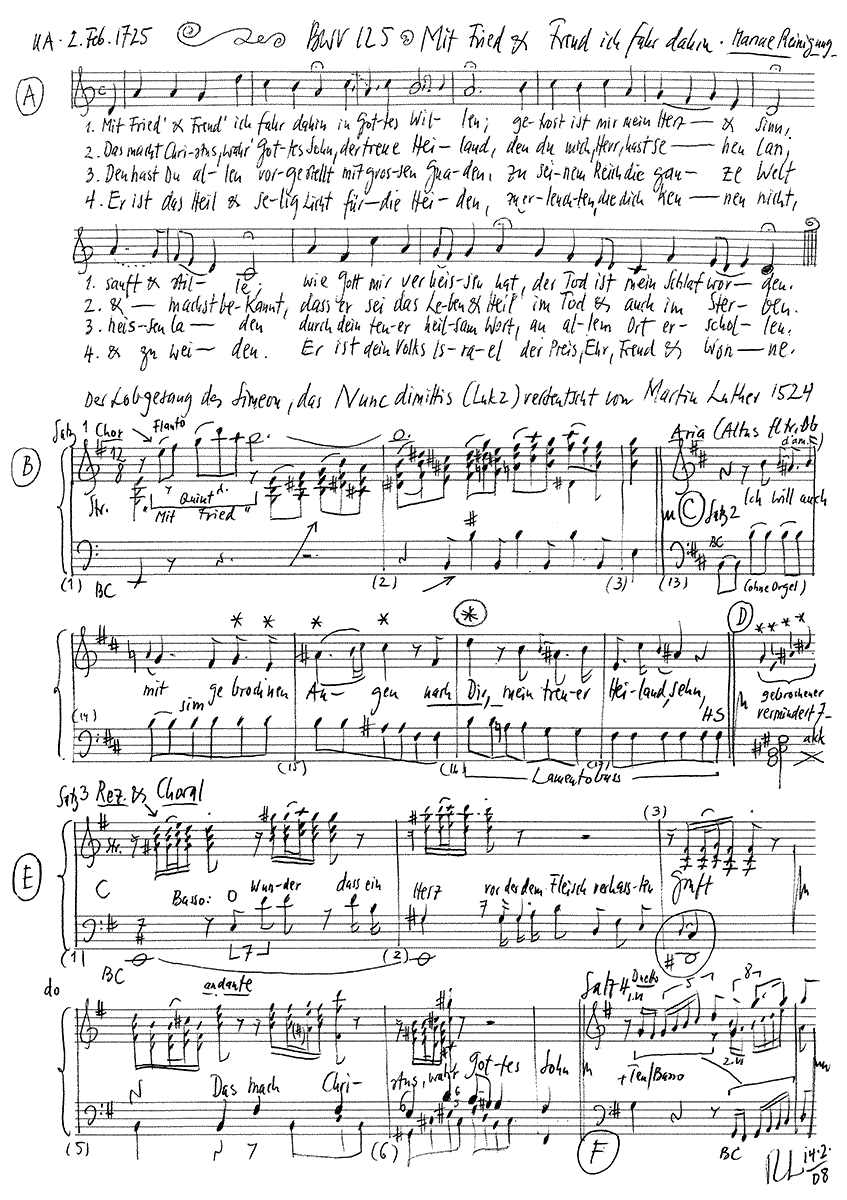 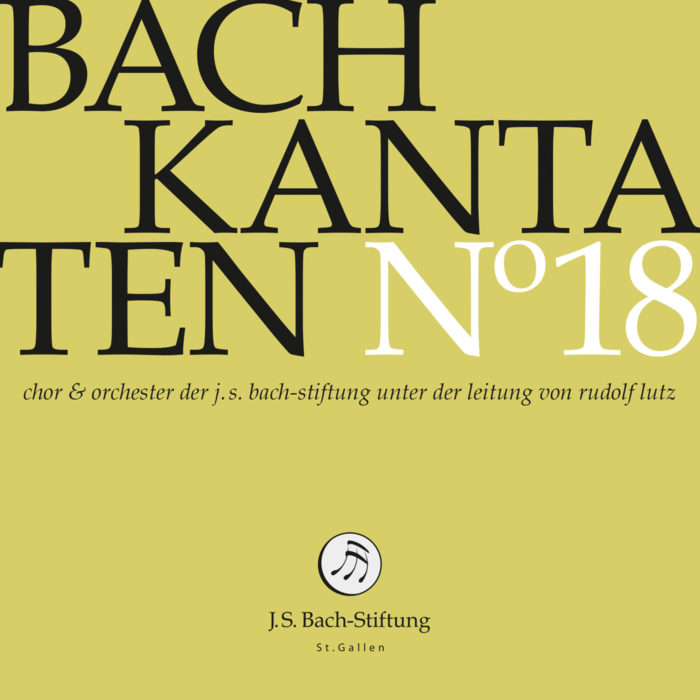 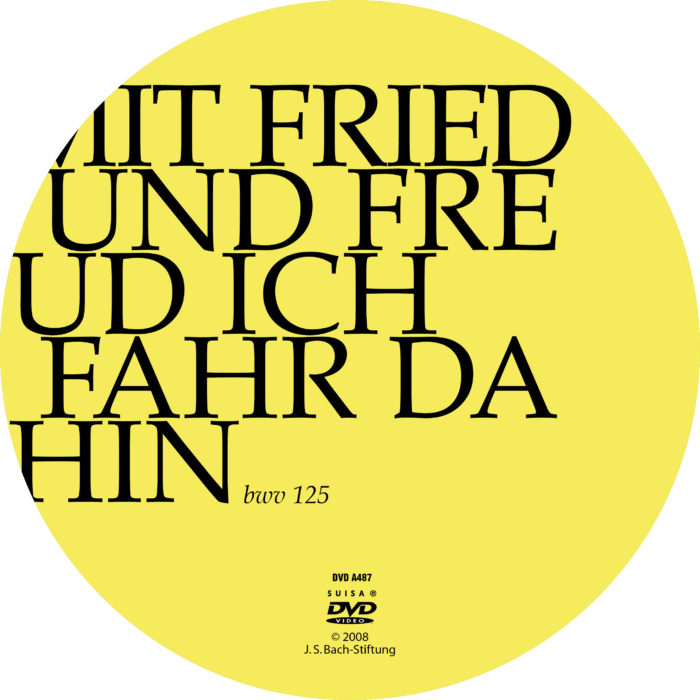 Text No. 2, 4, 5
Rearrangement by an unknown writer

In the introductory chorus, Bach presents an elegiac and “quiet” setting that expresses not only the relief of the departed, but also the grief of the mourners. In a gently swinging 12⁄ 8 setting, the strings and the bleak, Passionlike timbre of the transverse flute and oboe enshroud the subdued vocal lines. The translucent, fragile movement reaches its musical climax on the words “calm and quiet” and in the rendering of the “eternal slumber” in the closing lines of the hymn.
This mood is sustained in the alto aria, although the librettist subjectively reframes the main statement by recasting the canticle text of “For mine eyes have seen thy salvation” as the “broken vision” of those who have yet to die. This moment, at once both ecstatic and resigned, is musically underscored by the bare whisper of a woodwind duet and a sparse, lightly moving bass line that Bach clearly marked “Ligato per tutto e senza accompagnato” to prevent the addition of chords – life was audibly hanging by a silk thread. In this reverent miniature, Bach realised a veritable Ars moriendi, one that is fittingly set in the B minor key of the “Erbarme dich!” aria from the St Matthew Passion.
The ensuing bass recitative, by contrast, is structured as a two-tiered dialogue in which the chorale text, skilfully inserted between the expository passages, is given potent expression. In this setting, it is plain to hear that Bach attributed considerable power to the chorale, even in a period that was strongly influenced by courtly elegance: evidently the comments in his “Draft for a Well-Appointed Church Music…” of 1730 on the “former style of music … that no longer pleases our ears”, were not aimed at the chorale as such, but only at outmoded ideals regarding form and performance practice.
The tenor and bass duet embedded in an edgy trio setting obeys a reversal typical for Bach: The “light” in the Canticle of Simeon that “hath filled the orb of all the earth now”, is musically transformed from a bare metaphor to an elementary force of heart-stopping power. With his inimitably tangible grasp of theology, Bach succeeds in converting this musical foretaste of heaven into a hope that inspires the soul. As such, the “echoing” message of the middle section points the way from death back to life in a vocal and instrumental setting that makes a positively electrifying promise: “In faith shall all be blessed”.
The short but weighty alto recitative reinforces this promise by reflecting on the power of redemption; the mention of the “throne of mercy” and “grace” highlights two key terms of the Lutheran doctrine of justification through faith.
With the chorale verse “He is that grace and blessed light”, Bach pays the venerated Lutheran hymn its due justice. Indeed, the authoritative and uniting force of the chorale, upheld through the age-old tradition of congregational singing, lends the cantata a dimension of timelessness. Here, the horn part underscores the soprano line, lending the vocalists a robust force: Luther, in his lifelong struggle with the devil, pope and temptation, would no doubt have happily availed himself of such support.