(Who believeth and is baptized) for Exaudi (The Sunday after Ascension), for soprano, alto, tenor and bass; oboe d’amore I+II, oboe da caccia I+II, violoncello piccolo, strings and basso continuo 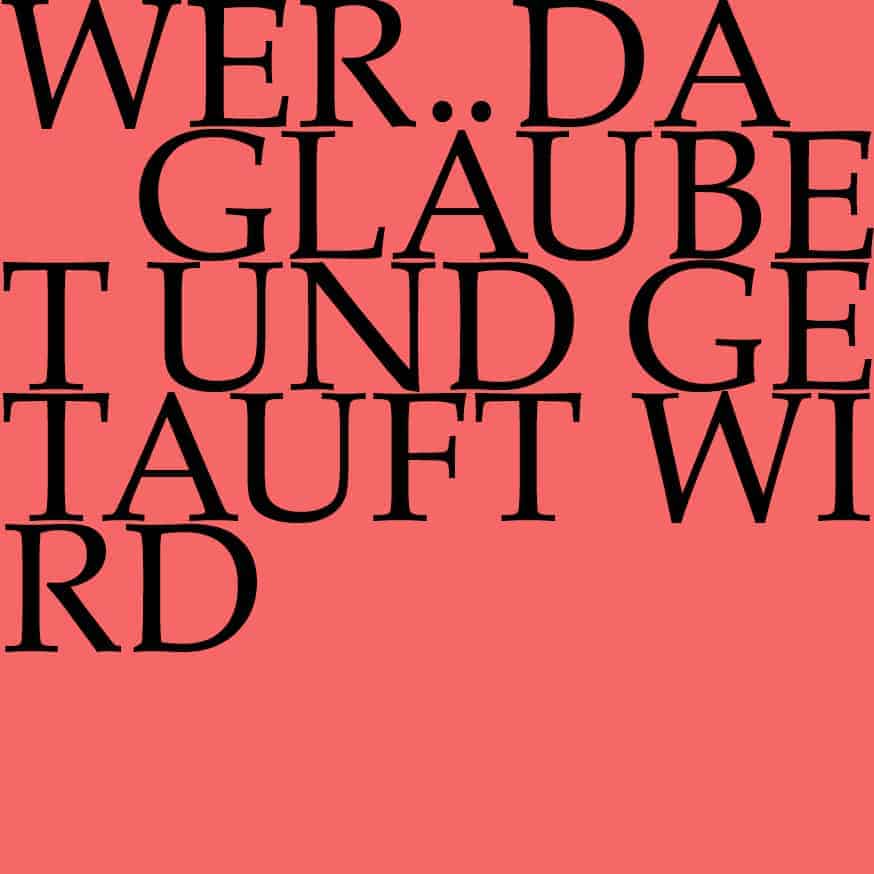 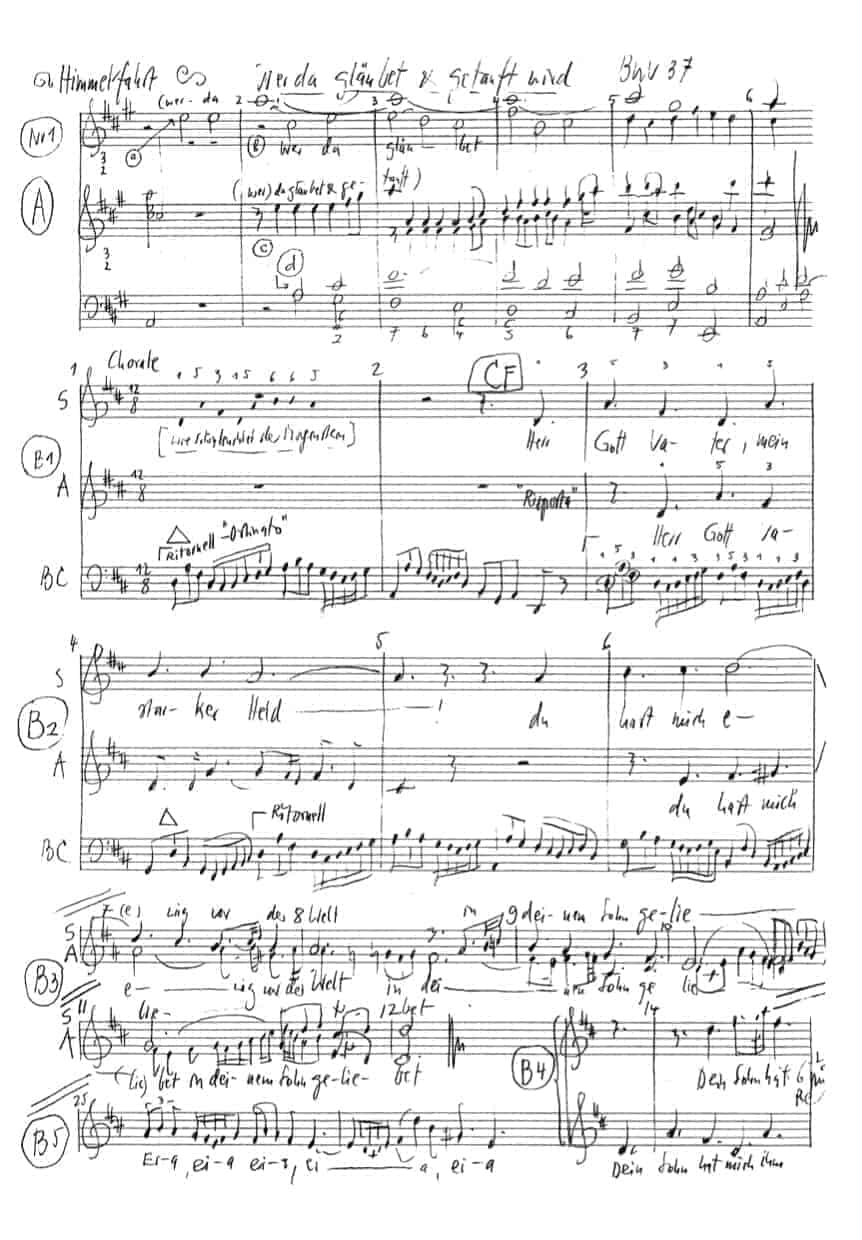 BWV 37 | He who believes and is baptised

45 years ago last Sunday I was baptised in the Protestant Reformed Church in Rehetobel. When I recently tracked down this date in the photo album that my mother had lovingly arranged, I fell silent at the rediscovery of the two pages dedicated to my baptism in words and pictures.

Ladies and gentlemen, dear listeners, I don’t know how you feel if, like me, you were baptised as an infant: Do you know your baptism day? And if so, what does it mean to you? What does your baptism mean to you?

I awkwardly swore at the two pages in the album throughout. What does my baptism mean to me? Carefully, I opened the envelope pasted into the album, bearing my name in an ancient script. Inside was the baptismal booklet, which contains prayers and texts for baptism. On the first page I came across my baptismal certificate, signed by “J. Zolliker Pfr.”, sealed by a stamp of the Protestant parish office. Johann Jakob Zolliker was pastor in Rehetobel from 1949 until the end of May 1976. My baptism was probably his last in office. I am fascinated by the thought of having been baptised by a Johann. Even if this Johann was called by his second name, Jakob. “Jakob” was also the name of my father and my paternal grandfather, before everyone from my great-grandfather back to my great-great-great-great-grandfather was called Johannes. Jacob means “heel holder” or “(God) protects / protect”, John translated means “God is gracious” or “God is kind”.

I had put the baptismal booklet next to the album while I pondered the two names and their meanings, my thoughts guiding me to the question of what makes people believe over the centuries that God protects and is gracious to them. In the process, my gaze brushed against the two photos at the bottom of the first album page, on which I am pictured, wrapped in a white christening robe, loved and protected, once with my godparents and once with my parents. Between the photos my mother had written in beautiful handwriting the baptismal verse from the Book of Isaiah chosen by the priest: “For the mountains shall depart and the hills shall fall: but my grace shall not depart from thee, neither shall the covenant of my peace fail, saith the Lord thy merciful God. (Is. 54, 10) God will always be merciful, even if this is often not immediately apparent, promises this sentence, which is historically assigned to the time of the Babylonian exile in the 6th century BC. The basic trust that God is involved, that I can hope that everything has a meaning and that justice, peace and love ultimately prevail, was and is comfort and light for many people. That can be liberating! “Faith gives wings to the soul so that it soars into the heavens” we read in our cantata for Ascension Day. Baptism is the “seal of grace”, the privilege to accept faith as a “pledge of love” and through it to shape one’s own life and attain eternal life.

I picked up my baptismal booklet once again to give its contents a second chance, but I didn’t get as far as the texts. I had discovered the title vignette, an illustration by Konrad Grimmer (1915-1950) from the 1940s (Fig. 1). It shows a band of clouds from which the Holy Spirit descends in the form of a dove onto a cup-shaped baptismal font filled with water. The water in the basin is not still, but undulating, as if moved by an invisible hand.

I didn’t have to think long about where I had already encountered this depiction in a similar form. All I had to do was close my eyes – and I would like to invite you, dear listeners, to accompany me on a little excursion that first takes us to the monastery of St. Johann in Müstair in the Münstertal, in the easternmost tip of Switzerland, and then via Italy back to eastern Switzerland, to the church in Trogen.

It was a Sunday morning in July 2019. For years, I had once again spent the night in Müstair, a few metres from the monastery of St. Johann. The awakening day lured me to the monastery church, a place I have liked since I knew it. I had time. A Benedictine nun was praying quietly next to the statue of Charlemagne, the legendary founder of the monastery. She didn’t notice me, and I was careful not to disturb her. I sat down in one of the front rows of benches on the left side of the nave. From there I had a clear view of the north wall, in which only one thing interested me: the Romanesque stucco panel set into it with the depiction of the baptism of Jesus (Fig. 2).

For a long time I pondered what fascinates me so much about this 1000-year-old stucco relief. I think it is my amazement that its perfection of form, in a thoroughly independent interpretation of the motif, has been able to radiate confidence over the centuries. Jesus Christ stands frontally in the wave-like piled up waters of the Jordan. In the centre of the depiction rests his navel, which is shaped as an eye. His real eyes are alert and round, his facial expression invitingly friendly. The baptism by John has already been performed. The Holy Spirit in the form of a dove descending from a curtain of clouds and the open left hand over the heart indicate that Christ receives God’s blessing (Mark 1:9-11) and with his right hand passes it on in the name of the Trinity to John, who accepts it in a humble posture with open hands. On the other side of the Jordan, an angel with the robe of the Lord is waiting, for Christ would rise from the water in the next moment. This impressive snapshot makes the dove’s beak merge with Christ’s crown and navel to form a line rooted in the broad crest of the wave, connecting heaven and earth. Two columns flank the composition, which was originally painted. They consolidate the calm and constancy that the structure radiates – despite the dynamism inherent in receiving and passing on the blessing.

The depiction of the baptism of Jesus has been known as a motif in Christian iconography for over 1600 years. As a mosaic in the domes of baptisteries, as a relief on baptismal fonts and vessels, as a painting, book illustration or marquetry work, it has left a narrative trail through the centuries that made me pause in thought in the pew in view of our fast-paced, short-lived, image- and charm-rich times. The self-confident depiction of Christ as centre and mediator is one of the nuances that makes the baptismal relief of Müstair, at least for me, something very special about which I would like to continue to gather information and reflect.

With such thoughts, I left the wonderful place. The small travel group to which I belonged continued the journey to Italy. The question of baptism receded into the background. Other things were more important, until a good week later, on the autostrada between Livorno and Genoa, the exit “Carrara” instantly called me back to the baptism. This time not to a monastery in the mountains, but to a church – ours – in the hills. The trigger was once again a Johann: the textile merchant Johannes Zellweger-Hirzel (1730-1802). Around 1781, he had a baptismal font made of Carrara marble made in Genoa for the new church being built in his home town of Trogen and transported across the Alps (Fig. 3).

The gem has a circular baptismal font sitting on a shaft in the shape of a candelabra, entwined with acanthus leaves. An artistically forged octagonal (!) lattice offers protection. And to all those who look even closer, the wooden lid of the baptismal font, which at first seems inconspicuous, shows an inlay depicting the baptism of Jesus in the Jordan (Fig. 4). The skin parts of Christ and John and the dove are made of precious ivory! This Trogen baptismal font with its transalpine history was originally not in its present location in the choir, but in front of the choir arch in the nave (Fig. 5), directly under the ceiling painting depicting Christ blessing the children (Luke 18:16) (Fig. 6).

As the integrating centre of the Reformed faith community, it was surrounded by pews that filled the nave, the gallery and the entire choir. As the navel of a microcosm, his water and the hand and words of the baptising minister gave and still give the privilege of belonging.

You have noticed, the excursion is over and I am back in the here and now. The dove swooping down from the curtain of clouds saved me from having to deal with the second clause of Mark 16:16 in my baptismal booklet: “He who believes and is baptised will be saved”, Johann Sebastian Bach set to music. “But he who does not believe will be condemned”, he did not set to music. I like this omission. For me, cultural history, the positive and creative things of the centuries, the manifold forms of expression of the visual and performing arts, music and literature and the miraculous things that emerge from them, such as the baptismal relief of Müstair and the baptismal font of Trogen, are encouragement par excellence. How much knowledge, skill, dedication and good will is contained in all these testimonies up to the present day! And if we add to this the goodwill of people who are selflessly there for others, who help where support is needed, then for me the friendly face of Christ on the stucco relief in the north wall of Müstair stands for the confidence that faith can be understood as something that drives us to use our abilities and talents in this world in such a way that we succeed in sharing joy and love. This can make us content, happy and fulfilled.

Ladies and gentlemen, dear fellow human beings from near and far, in this spirit I wish you much joy in listening to our cantata for the second time today and for the coming Pentecost days time to reflect – and to be.

Many thanks to Prof. Dr. Jürg Goll, Müstair, and Prof. Dr. Paul Michel, Zurich, for the inspiring exchange on the baptismal relief in Müstair.